Effective coverage of marijuana expungement efforts and work still to do 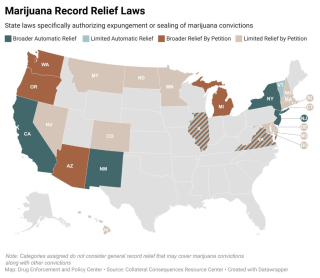 The PBS News Hour has this great new and lengthy piece about marijuana expungement laws and practices under the headline "As more states legalize marijuana, people with drug convictions want their records cleared."  Regular readers know I have long been invested in these issues  (see my 2018 article, "Leveraging Marijuana Reform to Enhance Expungement Practices"), and I am especially pleased that folks at the Drug Enforcement and Policy Center worked with folks at the Collateral Consequences Resource Center to create the national map found in the PBS piece and reprinted here.  I recommend the PBS piece in full, and here are some excerpts:

Sixteen states and the District of Columbia have legalized recreational marijuana over the last nine years, and industry advocates have applauded measures to de-stigmatize the substance and bring major revenue to state coffers.  But for people with lingering drug convictions like Michael, the news has raised more questions about what legalization means for their criminal records.

Currently in Virginia, “you have to go through all these hoops and loopholes to actually have an expungement,” Michael said.  This may soon change.  Like many other states that recently legalized marijuana, Virginia lawmakers included provisions in their legislation that over several years will allow for the automatic expungement of certain marijuana convictions, meaning people like Michael may one day see their records cleared without having to petition to do so.

Such measures signal a broader effort by lawmakers to right the wrongs of the war on drugs, a decades-long campaign by federal and state governments to crack down on use of illegal drugs that also helped incarceration balloon in the U.S.  States have begun to legalize substances like marijuana that have disproportionately imprisoned Black and brown Americans over the last 50 years, affecting their access to employment, education and housing.  Racial justice advocates argue that state legislatures should not consider legalization bills unless they include proposals to help people easily expunge their records, as well as eliminate some of the barriers to entry Americans of color face when looking for work in the cannabis industry.

But just as states did not legalize recreational marijuana overnight, the lingering effects of the war on drugs are not likely to quickly disappear.  Though Virginia Gov. Ralph Northam pushed to make cannabis legal in the state by the beginning of July, for example, many expungement provisions in the legalization and record-sealing laws are not set to take full effect until 2025 as state police and courts need time to update their computer systems and processes.

As a result, many Americans with marijuana charges on their records are currently living in a grey area, cautiously optimistic about the wave of legalization taking place but unclear what it means for their future.  “[Politicians] are making strides toward being really liberal and legalizing [weed], and that’s cool, but at the same time I served 10 years for this,” said Harry Kelso, another Virginia resident who served time in prison for possession and distribution.  “So at some point, I feel like I deserve some reparations.”...

Pauline Quirion, director of the Criminal Offender Record Information (CORI) & Re-Entry Project at Greater Boston Legal Services and an adviser to Mass CultivatED program participants, said she thinks it’s a good sign when she works with clients seeking to seal or expunge their records because it means they’re focused on securing a career.  She said that the adverse effects of a criminal record are evident from their experiences with the job search process. “Some clients have applied for like 200 jobs and they’re rejected, but they keep applying,” she said.  “So you have to have a lot of stamina to find employment.”...

David Schlussel, an expert on marijuana expungement with the Collateral Consequences Resource Center, said recent efforts to pass laws to expunge marijuana records in states such as Virginia, New Mexico, and Arizona signal a greater awareness of the harmful impact cannabis continues to have on communities targeted by the criminal justice system.  He said that when states first began legalizing recreational marijuana 10 years ago, they rarely considered legislation that would help people clear their records.  Campaign messaging to promote the new laws in states such as Colorado and Washington was usually driven by consumerism and tax benefits rather than racial justice.  Schlussel said this began to change as lawmakers began to emphasize the necessity of racial justice in marijuana reform in their messages to voters, which in turn gave it more political capital.

More than 20 states have passed reforms related to marijuana expungement, Schlussel said, with outcomes ranging from automatic pardons for a broad range of offenses to the possibility of expungement for a narrower set of charges.  But once these laws are on the books, states could very well face challenges getting a variety of marijuana charges expunged, he added.  While states like New Jersey, New York, and New Mexico recently passed bills to automatically expunge a wide range of marijuana offenses from people’s records, others have pursued approaches that are resource-intensive and still include a number of hurdles for people who want their offenses cleared.

In Arizona, where recreational marijuana recently became legal, expungement is possible but not automatic.  Julie Gunnigle, who ran unsuccessfully for Maricopa County attorney in the fall, said clearing Arizonans’ records is dependent on the support of county attorneys and the state’s attorney general, making it subject to the whims of politicians who may not necessarily be inclined to clear a broad swath of charges.  Although Gunnigle praised the “first-of-its-kind” expungement law that recently passed along with legalization, she added that “it is now going to be incumbent on leaders to find the folks who are eligible or those who are eligible to come forward and file these petitions if they want to get justice.”