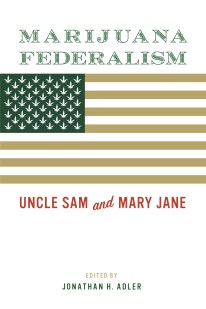 I believe I have previously noted some of the marijuana reform essays in the terrific collection published last year by Brookings under the title "Marijuana Federalism: Uncle Sam and Mary Jane." (Information about the book can be found here and here.)  I am now pleased to see that Paul Larkin, Jr. has this notable new article titled "Reflexive Federalism" which engages with many of the ideas and essays in Marijuana Federalism.  Here is its abstract:

Over the last twenty-plus years, a majority of states have concluded that marijuana has legitimate therapeutic and recreational value, and those states allow private parties to cultivate, sell, possess, and use it under a state regulatory régime.  Consequently, we have witnessed the development of state cannabis regulatory programs that are inconsistent legally, practically, and theoretically with the approach that our national government has taken for fifty years.  How do we resolve that conflict between state and federal law?  The Supreme Court has refused to take this issue away from the political branches of the federal government by ruling that it is a matter within the states’ bailiwick.  The Executive Branch has failed to take a coherent position regarding whether, when, and how it will enforce the existing federal law.  And Congress has abdicated its responsibility to clarify what should be federal policy in a field where only Congress can decide.  The result is that we have one law for Athens and one for Rome. Not surprisingly, that strategy is not working for anyone other than those members of Congress who wish to avoid casting a vote on the issue.

Some of Marijuana Federalism’s contributors encourage Congress to “cowboy up” politically and eliminate the disarray in the law by leaving it to each state to decide, while others try to persuade the Supreme Court to take another whack at the issue and rule that Congress cannot generally regulate the intrastate sale of cannabis.  The threads that tie the essays together are the potential benefits we might see from permitting multiple states to devise different regulatory approaches and the affinity for decentralized decision-making built into our Constitution’s DNA.  What Marijuana Federalism is missing, however, is a treatment of the argument that Congress should leave decisions regarding the recreational use of marijuana to the states, but not whether it has legitimate medical uses. For 80 years the nation has entrusted the Food and Drug Administration with the responsibility to decide what is a “drug” and what drugs are “safe” and “effective.”  There is no good reason to treat cannabis differently.