After strong bipartisan approval in US House again, will US Senate finally take up SAFE Banking Act? 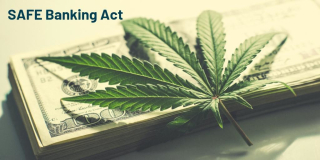 A big week for discussion of marijuana reform got off to a big start thanks to a vote in the US House of Representatives.  This effective Marijuana Moment piece, headlined "U.S. House Approves Marijuana Banking Bill For Fourth Time, Setting Up Senate Consideration," provides these details:

The U.S. House of Representatives on Monday approved a bill to protect banks that service state-legal marijuana businesses from being penalized by federal regulators.  After receiving an initial voice vote earlier in the afternoon, members passed the legislation by a final recorded vote of 321-101.

The legislation, which was reintroduced by Rep. Ed Perlmutter (D-CO) and a long bipartisan list of cosponsors last month, was taken up under a process known as suspension of the rules, which does not allow for amendments and requires a 2/3rd supermajority to pass....

Because marijuana businesses are largely precluded from accessing traditional financial institutions and have to operate on a mostly cash-only basis, that makes them targets of crime — a point that advocates, regulators and banking representatives have emphasized.  “Even if you are opposed to the legalization of cannabis, you should support this bill,” Perlmutter added.  “American voters have spoken and continue to speak — and the fact is, you can’t put the genie back in the bottle.  Prohibition is over.”...

Rep. Patrick McHenry (R-NC) spoke in opposition to the legislation, stating that “regardless of your position on this bill, I do think the fact remains that cannabis is a prohibited substance under Schedule I of the Controlled Substances Act — and let me further state, by enacting this legislation, we’re effectively kneecapping law enforcement enforcement and legalizing money laundering.”

But in a sign of the bipartisan nature of this reform, Rep. David Joyce (R-OH) took to the floor to defend the legislation. He said “I’m proud to help lead this common sense and overdue effort.”

“At a time when small businesses are just beginning to recover from the economic destruction caused by COVID-19, the federal government should be supporting them, not standing in their way,” he said.

McHenry was the only lawmaker to rise against the bill on the floor, yielding all additional opposition time to other Republican members who actually spoke in support of it.

Just before the debate started on Monday, the governors of 20 states and one U.S. territory — as well as bankers associations representing every state in the country and a coalition of state treasurers — sent letters to House leadership, expressing support for the reform legislation.

The vote marks the fourth time the House has approved the Secure and Fair Enforcement (SAFE) Banking Act. Lawmakers passed it as a standalone bill in 2019 and then twice more as part of coronavirus relief legislation.  At no point did the measure move forward in the Senate under Republican control last session, however.

But this time around, advocates and industry stakeholders are feeling confident that the bill’s path will not end in the House.  With Democrats now in control of both chambers and the White House, there are high expectations that the proposal will make its way through the Senate and onto the president’s desk.

I am hopeful, but not at all optimistic, that this bill will move forward in the Senate with Democrats now in control of the chamber.  Senate leader Chuch Schumer is expected to release a comprehensive marijuana reform bill "soon" and that bill will likely be a priority for Senators and advocates most eager to see federal marijuana reforms.  Senators and others backing broader reforms could potentially view the SAFE Banking Act as an insufficient reform that could undercut momentum for bigger reforms.