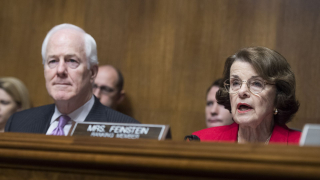 As reported in detail via this Marijuana Moment piece, headlined "Senate Marijuana Report Highlights Legalization’s Popularity And Risks, While Criticizing DEA Research Barriers," this notable new report on marijuana policies was released today by the Senate Caucus on International Narcotics Control.  Here is part of the story:

A U.S. Senate drug caucus released a report on Wednesday that recognizes broad voter support for marijuana legalization and expresses criticism of existing policies that inhibit research into cannabis, taking direct aim at the Drug Enforcement Administration’s (DEA) role in impeding studies.  But because of what they see as the risks of cannabis use, lawmakers also want the federal government to consider recommending THC caps on state-legal products.

Sens. Dianne Feinstein (D-CA) and John Cornyn (R-TX) co-chair the Senate Caucus on International Narcotics Control, which released the document, and neither are generally viewed as allies of the legalization movement.  The report, which was first reported by Politico, largely focuses on the need to boost research into the effects of cannabis, with members voicing concern about issues such as impaired driving, THC potency and marijuana use by vulnerable populations. At the same time, however, it acknowledges the “increasing popularity” of legalization and outlines some of the benefits of enacting the policy change.

“Despite its increasing popularity—91 percent of Americans believe cannabis should be legalized for either medical or recreational purposes—cannabis remains illegal at the federal level,” it says. “Nonetheless, the U.S. cannabis industry is thriving. Cultivation and sales have largely shifted from Mexican cartels to U.S.-based businesses operating in licit, state markets (though a sizeable [sic] black market remains).”

“Experts estimate the licit cannabis market employs more than 200,000 individuals and will produce as much as $24 billion in profits 2025, nearly $9 billion of which will be from medical cannabis sales,” the caucus wrote.

The report discusses at length the need for further research into marijuana and points to a number of barriers — including the Drug Enforcement Administration’s position on international treaties — that have stymied studies into the plant. Members wrote that because “cannabis may hold both promise and peril” it is “imperative to increase the research base associated with cannabis, and that this research should be used to guide future policy so that appropriate regulations can be put in place to mitigate any negative public health consequences.”...

Overall, the report identifies five issues around marijuana policy and offers corresponding recommendations. It is far from universally favorable to cannabis reform—with much discussion on risks associated with impaired driving and youth consumption, for example—but it reflects how the rhetoric around marijuana is continuing to evolve in Congress, even in traditionally conservative panels like the one that produced the new document.

“Despite growing acceptance and accessibility of this drug and its derivatives, there is still much we don’t know about the effects of marijuana usage,” Cornyn said in a press release. “It’s critical for policymakers to understand the public safety implications of increased marijuana use before diving in to the complex and difficult job of changing federal policy, and it is my hope that this report will help inform these important policy decisions in the future.”

Feinstein said that she hopes the report will “speed final passage” of a marijuana research bill she introduced alongside Sen. Chuck Grassley (R-IA) in February. She said the legislation, an earlier version of which cleared the Senate toward the end of last year but which was not merged with a separate House-passed bill in time to be enacted, would mark “an important step to ensure that Congress is well-informed about this policy area.”