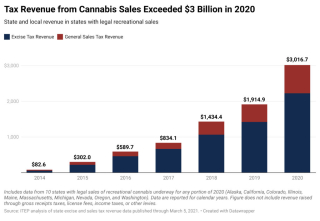 I have been recently thinking about metrics used to assess marijuana reform, and this recent post at the Just Taxes blog from the Institute on Taxation and Economic Policy flags a new benchmark in a notable metric. The piece by Carl is titled "State and Local Cannabis Tax Revenue Jumps 58%, Surpassing $3 Billion in 2020," and here are excerpts:

Cannabis taxes are a small part of state and local budgets, clocking in at less than 2 percent of tax revenue in the states with legal adult-use sales. But they’re also one of states’ fastest-growing revenue sources.

Powered by an expanding legal market and a pandemic-driven boost in cannabis use, excise and sales taxes on cannabis jumped by more than $1 billion in 2020, or 58 percent, compared to a year earlier. In total, these taxes raised more than $3 billion last year, including $1 billion in California alone. These are the findings of an ITEP analysis of newly released tax revenue data from the 10 states where legal sales of adult–use cannabis took place last year.

About a third (36 percent) of the nation’s cannabis tax revenue growth occurred in California as the state’s relatively new adult-use market continued to gain its footing after a somewhat sluggish start. The next most significant source of new revenue was Illinois, which started legal retail cannabis sales on Jan. 1, 2020.

States with more established markets such as Washington, Colorado, Oregon, and Alaska also saw significant growth in revenue, likely driven in part by an increase in cannabis use during a time of stay-at-home orders and self-quarantining. The slowest year-over-year growth, by contrast, occurred in Nevada as would-be tourists wary of COVID steered clear of Las Vegas. Nevada’s economy and state budget have been among the hardest hit in the nation during the pandemic. Even so, Nevada’s cannabis tax revenues rose 14 percent compared to a year earlier.

While the pandemic has taken a significant toll on state and local budgets overall, its impact on cannabis taxes (and alcohol taxes, for that matter) appears to have mostly been a positive one. Total excise and sales tax revenue from cannabis during the first six months of the pandemic (March through August 2020) shot up by 44 percent compared to the previous six-month period. That’s compared to 17 percent growth in the six months prior. The spike in revenue is clearly visible in the figure below. Notably, it occurred not just in the states with new markets like Illinois and Michigan where rapid growth would have been expected even under normal circumstances, but also across the five states with more established legal markets that launched between 2014 and 2017.