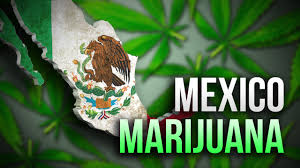 This New York Times article, headlined "Mexico Set to Legalize Marijuana, Becoming World’s Largest Market," reports on the latest reform developments from south of the border.  Here is how the piece gets started:

Lawmakers in Mexico approved a bill Wednesday night to legalize recreational marijuana, a milestone for the country, which is in the throes of a drug war and could become the world’s largest cannabis market, leaving the United States between two pot-selling neighbors.

The chamber approved the bill in general terms Wednesday evening before moving on to a lengthy discussion of possible revisions introduced by individual lawmakers.  In its final form, though, the measure is widely expected to sail through the Senate before being sent to President Andrés Manuel López Obrador, who has signaled support for legalization.

The measure, as of Wednesday night, would allow adults to smoke marijuana and, with a permit, grow a small number of cannabis plants at home. It would also grant licenses for producers — from small farmers to commercial growers — to cultivate and sell the crop.

“Today we are in a historic moment,” said Simey Olvera, a lawmaker with the governing Morena party. “With this, the false belief that cannabis is part of Mexico’s serious public health problems is left behind.”

If enacted, Mexico would join Canada and Uruguay in a small but growing list of countries that have legalized marijuana in the Americas, adding further momentum to the legalization movement in the region. In the United States, Democrats in the Senate have also promised to scrap federal prohibition of the drug this year.

For “Mexico, given its size and its worldwide reputation for being damaged by the drug war, to take this step is enormously significant,” said John Walsh, director of drug policy for the Washington Office on Latin America, a U.S. advocacy group. “North America is heading toward legalization.”