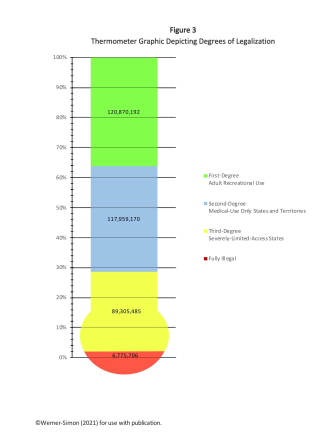 This new and extended Law360 piece authored by Julie Werner-Simon provides an interesting accounting of the landscape of marijuana legalization.  The piece is titled "3 Degrees Of Legalization Show True Prevalence Of Cannabis," and merits a full review (in part because it has a number of original graphics of interest). Here are excerpts (along with one of the graphics):

Across the political spectrum and the wide swath of the U.S. — including far-flung territories — just shy of 7 million of America's almost 335 million inhabitants live in a place where marijuana usage is completely illegal.

Although marijuana has been federally illegal for 50 years since the administration of President Richard Nixon and the implementation of the Controlled Substances Act, that has not stopped U.S. states and territories from taking things into their own hands.

First-degree states and territories are those which have legalized adult recreational use.  In first-degree regimes, adults of the state or territory can legally purchase marijuana without the need to show any medical preconditions.

Rounding off the trifecta are the third-degree states that comprise an even smaller number of places with severely limited access, or SLA, to medical marijuana products.  This third category, which includes only states and no territories, typically permits restricted marijuana use to a limited number of universities or research institutions or for limited medical purposes by a patient population comprised primarily of those with incurable diseases, seizure disorders or epilepsy.

Some, but not all, SLA states cap the quantity of THC in any medical use of the marijuana product in that state, or restrict the amount a patient can receive in a set period, and some make it illegal to smoke medically authorized marijuana product.

SLA status, the third-degree designation, is often a precursor to becoming a second-degree medical use state. SLA communities can become accustomed to having restricted programs, with some even referring to their SLAs as medical marijuana programs....

There is no dispute about the distinctions between first-degree and second-degree states, but the muddled lines between what constitutes second-degree and third-degree regimes cause the variations in the answer to the question: Where is marijuana illegal?

From a visitor's perspective, the bulk of SLA states would reasonably appear to be fully illegal when, in fact, there are narrow legal grounds for some to use or study marijuana in those states.

Applying the three-degree analysis, there are only three states and one U.S. territory where marijuana is entirely illegal, that is, verboten for use in any form.  These are Idaho, Nebraska, Kansas and American Samoa. That's fewer than 7 million people in all of America living in places without some degree of marijuana legalization....

With all this activity on the state and territory level, the marijuana investment bonanza, as well as the advent of a new administration and an ever-so-slight Democratic majority in the U.S. Senate, surely a thawing of the federal prohibition of marijuana is not far behind?

Not so fast and not tomorrow.  There will be no early groundhog spring[56] for marijuana in 2021.  The life and death consequences of COVID-19 have made it America's top priority; marijuana legalization has taken a backseat. Yet there will likely be incremental actions occurring after COVID-19 fiscal relief and increased vaccination levels and before the 2022 midterms....

Mandeep Trivedi, a well-regarded corporate valuator of marijuana businesses has said, where marijuana is concerned "[t]he almighty dollar is an almighty force."  It is the dollar that has caused inroads into the once impregnable view that supporting marijuana legalization is political suicide.

All economic indices show that marijuana legalization generates oodles of much-needed cash for governments.  The experiences of the legalized states, from the first- through the third-degree, prove this maxim. Federal government coffers depleted by COVID-19 costs, the payment of stimulus relief funds and the 2018 federal tax cuts are in need of replenishment. Marijuana can make this happen.

There are 20 months until the 2022 midterms.  The soil is tilled for receptivity to a more mature marijuana industry operating under coexisting federal and state regulation and taxation systems.  Even for the most conservative of political actors, this groundswell will be hard to resist.  Marijuana has gone mainstream; its tie-dye stigma has diminished while action from the federal government has been incentivized.  Federal marijuana legalization will ultimately have its day.