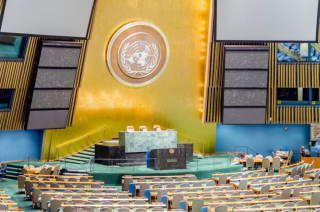 I am not at all an expert on international law, by I still think I know enough to regard actions today by the United Nations Commission on Narcotic Drugs regarding cannabis is a pretty big deal.  This official press release provides the special details, and this NPR story provides a bit more context.  Here are excerpts:

The U.N. Commission on Narcotic Drugs voted to reclassify cannabis Wednesday, taking it off the strict Schedule IV list that includes dangerous and highly addictive drugs such as heroin.  The U.N. still deems cannabis a controlled substance.  But the move, which the U.S. supported, could ease restrictions on research into marijuana's therapeutic use.

The 53-member commission approved the change in a close vote, by 27-25, with 1 abstention.  Russia was a vocal opponent of the move, calling cannabis "the most abused drug globally."

The U.N. vote follows guidance from the World Health Organization and its expert committee on drug dependence, which had recommended deleting "cannabis and cannabis resin" from Schedule IV of the 1961 Convention on Narcotic Drugs.  The drug will now remain in Schedule I rather than appearing on both lists.  The vote had been closely followed by marijuana activists and the burgeoning cannabis industry, as it could bolster arguments for easing legal restrictions on marijuana and establishing consistent regulations.

In its recommendation to the U.N. Commission on Narcotic Drugs, the WHO committee noted that cannabis can have adverse effects and cause dependence.  But it also cited the drug's benefits in reducing pain and nausea, as well as easing symptoms of medical conditions such as anorexia, epilepsy and multiple sclerosis. And it noted that unlike opioids such as fentanyl, cannabis is not associated with a significant risk of death.  The committee said, "the inclusion of cannabis and cannabis resin in Schedule IV is not consistent with the criteria for a drug to be placed in Schedule IV."

The WHO committee also said that despite "limited robust scientific evidence on the therapeutic use of cannabis," the drug has been shown to be different from Schedule IV substances that have little or no therapeutic use.

"This is a major win for cannabis advocates around the world with considerable symbolic and some practical implications for cannabis regulation," according to Conor O'Brien of Prohibition Partners, a global industry analyst group.   Taking cannabis off of the list of most restricted substances, he added, means that the U.N. agrees with the WHO "that cannabis is not 'liable to produce ill-effects' on the scale of other drugs in Schedule IV, and that cannabis has significant potential therapeutic value."

It's up to each country to form their own drug policies and punishments.  But international drug control treaties allow their parties to ban or limit the manufacture or import of the most dangerous substances. Under the 1961 convention, Schedule IV is reserved for drugs that are particularly liable to abuse and harm.  "Such liability is not offset by substantial therapeutic advantages," the U.S. Justice Department says in its guide to complying with the treaties. With cannabis now classified differently, the calculus for studying its potential benefits is now likely to change.

The U.S. was represented at the session by Ethan Glick, counselor for U.N. Affairs at the U.S. Mission to International Organizations in Vienna, who said, "the legitimate medical use of a cannabis preparation has been established through scientific research, and cannabis no longer meets the criterion for placement in Schedule IV of the Single Convention."   Glick cited the U.S. Food and Drug Administration's approval in 2018 of a purified cannabidiol extract for use in treating rare seizure disorders in children. And he cautioned that cannabis poses public health risks, particularly to young people and pregnant women.

But reclassifying cannabis in a less strict control category, Glick added, could spark new research into its medical benefits.  "This action has the potential to stimulate global research into the therapeutic potential and public health effects of cannabis and to attract additional investigators to the field including those who may have been deterred by the Schedule IV status," Glick said.