How many House Republicans are going to vote in support of the MORE Act? 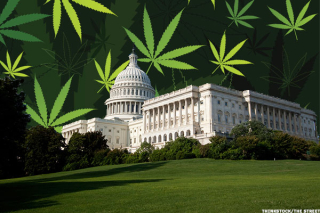 A few months ago there was lots of excitement about the announced plans for the US House of Representatives to vote on H.R. 3884, the Marijuana Opportunity Reinvestment and Expungement Act of 2019 (MORE Act).  But House leadership put off the vote until after the 2020 election, and now excitement is growing again as a vote is being discussed again.  This new Marijuana Moment piece, headlined "House Leaders Propose Changes To Federal Marijuana Legalization Bill Up For Floor Vote This Week," provides an effective accounting of where matters stand.  Here is how it starts:

A key House committee has scheduled a Wednesday hearing to advance a bill to federally legalize marijuana toward a full floor vote, which could then happen as soon as Thursday. Meanwhile, leaders in the chamber are proposing an amendment that would make several changes to the cannabis legislation.  Among the most significant revisions would be to the tax-related provisions of the bill.

The Rules Committee’s move to take up the Marijuana Opportunity, Reinvestment and Expungement (MORE) Act follows Majority Leader Steny Hoyer (D-MD) announcement that the chamber would be holding a floor vote on the bill before the end of the year.

Judiciary Committee Chairman Jerrold Nadler (D-NY), the lead sponsor of the bill, transmitted it to Rules with the series of modifications—many of them technical in nature. But beyond the tax changes, the newly proposed language also reaffirms the regulatory authority of certain federal agencies such as the Food and Drug Administration (FDA) and clarifies that cannabis can still be included in drug testing programs for federal workers.  Other members of the House are likely to file proposed amendments as well, though the Democratic majority of the Rules panel will determine which ones can be made in order for floor votes later this week.

Because there is zero chance that the MORE Act will move forward in the Senate during this Congress, this House vote may seem mostly symbolic.  (Indeed, this new Politico piece, headlined "Why the next Congress is unlikely to legalize marijuana," highlights why marijuana reform is likely to remain an uphill battle in the Senate even in 2021 and beyond.)  But Jacob Sullum has this new Reason piece, headlined "Will a Historic House Vote on Marijuana Legalization Nudge Biden Toward More Ambitious Reforms?," which rightly suggests the vote could have an impact on Joe Biden and the work of the incoming Biden Administration.  As Sullum puts it, any "historic House vote to repeal [the federal marijuana] ban would allow him to go further than he has so far without sacrificing his cherished reputation as a moderate."

I share Sullum's view that the House lame-duck vote on the MORE Act could prove to be consequential, though my take is that the answer to the question in the title of this post could and likely will prove to be the most important part of the story (perhaps along with how many Democrats vote against the MORE Act).  If the MORE Act passes with only D support, the discourse over federal marijuana reforms is likely to remain quite partisan for the months and years to come.  But if more than a handful of GOP Representatives vote for the MORE Act, it will become that much easier for reform advocates to portray future federal efforts as bipartisan.

Notably, Florida GOP Rep, Matt Gaetz was one of the original 29 co-sponsors of the MORE Act.  The Act now has 120 co-sponsors, but Rep. Gaetz is still the only GOP Rep among that number.  My understanding is that there may be a few more GOP Reps who would ultimately vote for the MORE Act.  But without more than just token GOP support, I doubt even a passing vote on the MORE Act will be as consequential as many reformers might hope.