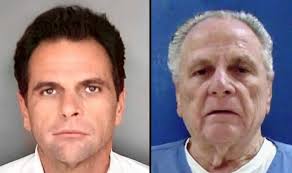 As reported in this AP piece, headlined "Man serving 90-year sentence for selling marijuana released from prison," a ridiculous sentence for a marijuana offense came to a partial conclusion this week.  Here are the basics:

While serving a 90-year prison sentence for selling marijuana, Richard DeLisi's wife died, as did his 23-year-old son and both his parents.  His adult daughter was in a horrific car accident and suffered a paralyzing stroke as a result.  He never met two granddaughters -- a lifetime of missed memories.

Yet, 71-year-old DeLisi walked out of a Florida prison Tuesday morning grateful and unresentful as he hugged his tearful family.  After serving 31 years, he said he's just eager to restore the lost time. DeLisi was believed to be the longest-serving nonviolent cannabis prisoner, according to the The Last Prisoner Project which championed his release.

DeLisi also finally met his 11-year-old and 1-year-old granddaughters for the first time this week....

DeLisi was sentenced to 90 years for marijuana trafficking in 1989 at the age of 40 even though the typical sentence was only 12 to 17 years.  He believes he was targeted with the lengthy sentence because the judge mistakenly thought he was part of organized crime because he was an Italian from New York.  DeLisi said he had opportunities, but never had any desire for that life.  He prefers not to dwell on lost memories and time he'll never get back. He's not angry, and instead takes every opportunity to express gratitude and hope....

When the then-40-year-old hipster with the thick Italian accent first entered prison, he was illiterate, but taught himself how to read and write.  Now, he wants "to make the best of every bit of my time" fighting for the release of other inmates through his organization FreeDeLisi.com....

Chiara Juster, a former Florida prosecutor who handled the case pro bono for the The Last Prisoner Project, criticized DeLisi's lengthy sentence as "a sick indictment of our nation."...

A bit more about this ugly case can be found via this Last Prisoner Project page titled "America’s Longest Serving Nonviolent Cannabis Prisoner Richard DeLisi to be Released After 32 Years Behind Bars."

Interestingly, as detailed in this CNN piece, the Florida Department of Corrections has represented that DeLisi's release was a routine matter:

Florida Department of Corrections press secretary Kayla McLaughlin told CNN that the decision to move up DeLisi's release date was not "related to any action by an outside party."

DeLisi's release date was initially moved up from summer 2022 to May 2021 after an error was discovered on his record, McLaughlin said, which restored 390 days of provisional release credits he was owed upon the start of his sentence in 1989.

Good behavior also earned him "gain time," or a reduction in his sentence. DeLisi had previously forfeited 120 days of "gain time" due to disciplinary infractions. But because DeLisi's last disciplinary report was from July 2005 and because he was 120 days from his new release date of May 2021, he was eligible to have his "gain time" restored, which moved up his release date, McLaughlin said.

Antonio Bascaro was released from federal prison in 2019 after serving 39 years as a first time nonviolent marijuana offender. He was 84 when he was released.

Calvin Robinson was a federal prisoner for marijuana. He was incarcerated in 1988 and was granted compassionate release in 2019 at the age of 79. These sentences are not compatible with the current culture and certainly not fiscally responsible.

Delivery is private and secure.

Yes, you can buy real marijuana with direct mail order and fast delivery to your home.