"Trends in Adolescent Treatment Admissions for Marijuana in the United States, 2008–2017" 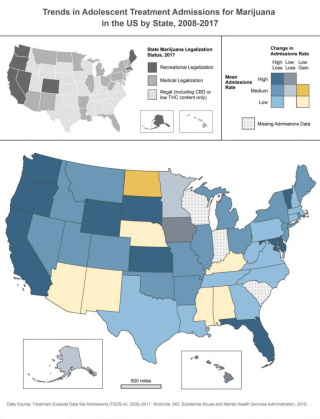 The title of this post is the title of this notable new publication from the CDC's Preventing Chronic Disease series authored by Jeremy Mennis.  (Hat tip Marijuana Moment.)  Here are the highlights and action sections that conclude the piece (with some sentences highlighted):

To our knowledge, this map is the first to illustrate state level trends in adolescent treatment admissions for marijuana, and the trends depicted can inform public health responses to changing marijuana laws.  Possible causes for the overall decline, and variations among states, in admissions trends include changes in attitudes toward marijuana, as well as differences among states in marijuana use and incidence of CUD, as well as in socioeconomic status, treatment availability, and health insurance (5).  Whatever the causes of the observed patterns, however, this research suggests that a precipitous national decline in adolescent treatment admissions, particularly in states legalizing recreational marijuana use, is occurring simultaneously with a period of increasing permissiveness, decreasing perception of harm, and increasing adult use, regarding marijuana (4,13).  These trends indicate the need for sustained vigilance in the prevention and treatment of youth CUD during this period of expanding marijuana legalization.