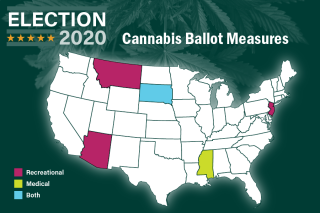 As of Wednesday morning after a very long 2020 Election Night, there is a lot which remains uncertain politically, but one matter is quite clear: marijuana reform is very popular all across the United States.  As noting in this post last night, marijuana reform ballot initiatives prevails by pretty large numbers in states as diverse as Arizona, Mississippi, Montana, New Jersey and South Dakota.   This Politico article, headlined "1 in 3 Americans now lives in a state where recreational marijuana is legal," provides some political context:

New Jersey and Arizona, with 8.9 million and 7.3 million residents, respectively, are the biggest wins for advocates this year.  Legalization in New Jersey is expected to create a domino effect for legalization in other large East Coast states, including Pennsylvania and New York.

South Dakota, Montana and Mississippi, while much smaller, are significant in another way: As red states, the passage of marijuana measures illustrates the shift in Republican sentiment toward marijuana.

The impact of these ballot measures will be felt in Congress, especially if Democrats regain control of the Senate.  If all the measures ultimately pass, a third of House members will represent states where marijuana is legal, as will a fourth of the Senate.  If Democrats end up in control of both chambers next year, expect those legal state lawmakers to be called upon to vote on significant changes to federal marijuana policy — including removing all federal penalties for using it.

As of this writing, it is still unclear who will be in the White House for the next four years, but it seems increasing clear that Democrats will not be in control of the Senate.  This reality leads me to speculate that, despite the big 2020 state ballot wins, it will still be quite challenging for Congress to move forward with any significant federal statutory marijuana reforms.  Whether to pursue a modest or major form of federal reform already divides Democratic lawmakers in various ways, and I doubt that Republican leadership in the Senate will be eager to prioritize or even advance various bills on this topic.  If the person in the White House decides he wants to focus on this issue, these political realities could surely change.  But, at this moment, it seems to me unlikely that a large number of lawmakers at the federal level will be keen to prioritize these matters in the short term.

But continued non-action at the federal level could actually make even more space for state-level reforms to continue apace.  As the Politico excerpt highlights, the outcome in New Jersey should increase the likelihood of traditional legislative reforms in states like New York and Pennsylvania and maybe other northeast states.  Also, the big ballot wins in red states in 2020 also makes even more likely that there will be ballot initiatives for full legalization or medical marijuana reform in a half-dozen or more states in the coming years.  Just off the top of my head, I count Arkansas, Florida, Idaho, Missouri, Nebraska, North Dakota, Ohio and Oklahoma as all real possibilities for state initiatives perhaps as early as 2022.