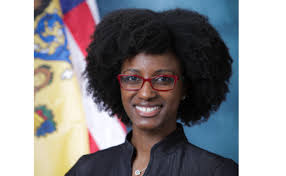 Because there has historically been a general lack of diversity in all sorts of government positions, I would guess that state administrators and regulators have not typically been an especially diverse bunch.  But, when Cat Packer in 2017 was appointed the first Executive Director of the Los Angeles Department of Cannabis Regulation, I started noticing the efforts in some quarters to try to ensure state and local marijuana regulators reflected more of the diversity of our great nation.  (Just some of a number of other notable regulators in this space include Toi Hutchinson in Illinois, Shaleen Title in Massachusetts, Marisa Rodriguez in San Francisco.)

These stories came to mind as I saw this story out of New Jersey from The Root, headlined "America Has Yet to Achieve Racial Equity in Cannabis Reform. New Jersey Is Hoping Dianna Houenou Can Change That."  I recommend the piece in full, and here are excerpts:

[A] third of Americans (more than 111 million total) now live in states where adults can legally purchase pot.  But although reform is sweeping the nation, with dispensaries popping up everywhere from Oakland and Denver to Baltimore and Chicago, America’s “green rush” has yet to substantially uplift the communities most harmed by the country’s devastating “war on drugs.”  Instead, white business-owners and large corporations have disproportionately benefited from cannabis reform, prompting fresh concerns about what the future of marijuana legalization holds for the Black and Latinx communities who suffered the most from America’s punitive drug policies.

New Jersey hopes to change that narrative.  On Friday morning, Gov. Phil Murphy appointed Dianna Houenou, a senior advisor with an extensive background in criminal justice reform, to lead the state’s Cannabis Regulatory Commission, which will be charged with shaping the state’s cannabis laws and ensuring that the communities devastated by the New Jersey’s drug policies reap the benefits of the burgeoning industry.

“Dianna has been a critical voice for social justice and equity on my team for the past year and a half after spending several years working on the fight to legalize marijuana with the ACLU,” Gov. Murphy told The Root in a statement. “Her commitment to doing what is right and to leaving no one behind has powered our criminal justice reform agenda, and I am immensely proud that she will be continuing that commitment as Chair of the Cannabis Regulatory Commission.”

New Jersey is the most populous of all the states that legalized recreational marijuana this week, and the first state in the mid-Atlantic to do so — leading Pennsylvania and New York, where lawmakers have long discussed legalization but have disagreed on how to do so.  In New York, a major part of that disagreement has stemmed from questions around equity and accessibility.  Nationwide, Black and Latinx Americans aren’t leading cannabis operations in significant numbers, nor have they been leading regulation or law-making efforts....

Working to make cannabis reform equitable will be no small task for Houenou and the commission, particularly in a state like New Jersey, where, despite similar rates of marijuana usage, Black people are 3.45 times more likely to be arrested for cannabis possession than white people.  As recently as 2016, the Garden State spent $669.3 million to enforce restrictive drug policies, “despite the grave racial inequities in fuels,” writes Insider New Jersey.

Because the country has yet to really get equity in the cannabis industry right, Houenou will be leading New Jersey into uncharted territory.  But if successful, the state could very well be a model for the region and the country at large.

Houenou isn’t going it alone.  She has the full support of Gov. Murphy, who made marijuana legalization a signature part of his 2017 election campaign.  She also understands that making cannabis reform truly equitable will be a holistic process requiring education, advocacy and buy-in from a variety of stakeholders, from law enforcement to those who lost years of their lives to drug prohibition policies.  For her and the commission, equity won’t be an afterthought, as it has been in other places.  “We really are looking to make sure that equity is built into a regulated structure at the onset,” she said.

Houenou stresses that under her leadership, nothing would be off the table for the commission.  This includes policies already existing in other places, including prioritizing permits for those who live in neighborhoods impacted by harsh drug policies, as well as individuals who have been entangled in the court system specifically for cannabis offenses. But she’s also interested in exploring — and breaking down — other barriers to entry and ensuring that revenue from these burgeoning businesses goes back into Black communities.