"Why Won’t Democrats Just Come Out for Legalizing Marijuana?" 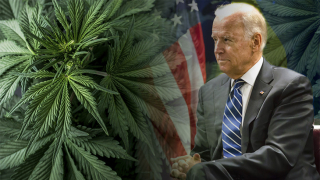 The question in the title of this post is the title of this new commentary at The Nation authored by John Nichols. The piece is in the same vein as the one noted here asking why Joe Biden won't embrace legalization.  Here are excerpts:

Some political issues are hard to wrestle with.  Some are easy.  Legalizing marijuana is easy.

A Pew Research Center survey found last fall that Americans back legalization by a 67-32 margin.  The numbers spike among Democrats, 78 percent of whom favor ending this form of prohibition.  But there’s also majority support — 55 percent — among Republicans.  Among voters under age 30, support for legalization is sky-high.

Enthusiasm for legalization extends far beyond the large number of Americans who are recreational users of marijuana to include millions of people who recognize, as does the American Civil Liberties Union, that “Marijuana Legalization Is a Racial Justice Issue.”...

When the [Democratic] party’s task force on criminal justice reform released its policy recommendations this week, legalization was off the agenda.  That was just one example of the caution that permeates the 110-page document submitted to the Democratic National Committee’s platform drafters by the six task forces that were set up in May by presumptive Democratic presidential nominee Joe Biden and his chief rival for the party’s nomination, Vermont Senator Bernie Sanders....

There’s criticism of mass incarceration and a good proposal to restrict federal funding for states that maintain cash bail systems. But there’s no plan to abolish the scandal-plagued Immigration and Customs Enforcement agency or to defund the police with an eye toward establishing new law enforcement models that strive for public safety and justice....

Color of Change senior director of criminal justice campaigns Scott Roberts told Politico that Biden “still seems to embrace kind of a law-and-order lite.” That was certainly the case when it came to upending marijuana laws.

The commission rejected legalization — the popular position backed by Sanders. Instead, it stuck to the more cautious approach that’s been maintained by Biden, a supporter of the drug war during his own Senate years who has softened some but not all of his old positions. Instead of legalization, the commission proposed to “decriminalize marijuana use,” reschedule cannabis on the Controlled Substances Act (CSA), and leave it to the states to decide about legalization.

The National Organization for the Reform of Marijuana Laws concluded that the proposal “is out of step with public opinion [and] would do little to mitigate the failed policy of federal prohibition.”

“It is impractical at best and disingenuous at worst for the Biden campaign to move ahead with these policy proposals. Rescheduling of marijuana under the Controlled Substances Act would continue to make the federal government the primary dictators of cannabis policy, and would do little if anything to address its criminal status under federal law,” explained Erik Altieri, the executive director of the National Organization for the Reform of Marijuana Law.  “Rescheduling marijuana is intellectually dishonest. Just as cannabis does not meet the strict criteria of a Schedule I controlled substance, it similarly does not meet the specific criteria that define substances categorized in schedules II through V.”

Why didn’t the commission simply endorse the Marijuana Justice Act, which has been introduced by New Jersey Democrat Cory Booker in the Senate and House Democrats Barbara Lee and Ro Khanna?  Sanders supports the measure, as do two of Biden’s vice presidential prospects, Warren and Senator Kamala Harris.  The answer is that Biden has a long history of opposing legalization — going so far in his resistance to the idea that, last year, Representative Alexandria Ocasio-Cortez suggested that the former vice president was employing “Reagan-era talking points.”

Is marijuana reform really a "Superweapon Biden Refuses to Use"?