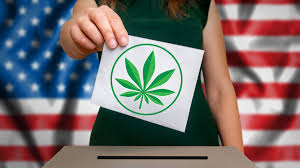 Kyle Jaeger has this helpful and timely piece at Marijuana Moment discussing the state of direct democracy marijuana and drug reform campaigns in the states. The piece is headlined "As Signature Deadlines Approach, Here’s Where Marijuana And Drug Policy Reform Campaigns Stand," and is worth a full read. Here are highlights:

Several drug policy reform campaigns are in the final stretch as deadlines to submit signatures for proposed ballot initiatives loom this week and next.

While the coronavirus pandemic dealt serious blows to marijuana, psychedelics and other drug reform groups in jurisdictions across the country, forcing some to end their campaigns, activists in Arizona, Idaho, Nebraska, Oregon and Washington, D.C. are still in the game, with some running against the clock to turn in enough valid signatures to qualify and others now waiting for officials to validate petitions they’ve already submitted. That’s in addition to measures that have already qualified for November ballots in states like Mississippi, New Jersey and South Dakota.

The proposed ballot measures would accomplish everything from legalizing cannabis to decriminalizing psychedelics such as psilocybin and ayahuasca. Here’s a status update on where they stand:

Smart & Safe Arizona is a campaign to put marijuana legalization on the November ballot, and it seems to be in good shape to qualify....

While the original deadline to submit signatures for an initiative to legalize medical marijuana passed on May 1, a federal judge recently ruled that the state must make accommodations for a separate non-cannabis ballot campaign due to signature gathering complications caused by the coronavirus pandemic and the government’s response to it. Activists feel the ruling will also apply to the marijuana measure....

Activists behind an initiative to legalize medical cannabis in the state turned in 182,000 raw signatures on Thursday — well more than the 121,669 valid submissions needed to qualify for the ballot....

A campaign to legalize psilocybin mushrooms for therapeutic purposes already submitted signatures that they feel will qualify them for the ballot....

Washington, D.C. activists are continuing to collect signatures for a proposed measure to make enforcement of laws against various entheogenic substances such as psilocybin, ayahuasca and ibogaine among the city’s lowest law enforcement priorities....

Here’s the status of other drug policy campaigns that have either succeeded or failed so far this year:

The Oregon Secretary of State’s office announced on Tuesday that a campaign to decriminalize currently illicit drugs and expand substance misuse treatment has qualified for the ballot.

Prior to the COVID-19 outbreak and stay-at-home mandates, measures to legalize marijuana for medical and recreational purposes qualified for South Dakota’s November ballot.

Mississippi activists gathered enough signatures to qualify a medical cannabis legalization initiative for the ballot—though lawmakers also approved a competing (and from advocates’ standpoint, less desirable) medical marijuana proposal that will appear alongside the campaign-backed initiative.

Montana activists recently turned in more than 130,000 signatures to qualify a pair of marijuana initiatives—one to legalize the plant for adult use and another stipulating that individuals must be 21 or older to participate — for the November ballot.  The state is currently validating those submissions.

A campaign to legalize marijuana in Arkansas will not qualify for the ballot this year, a spokesperson told Marijuana Moment on Tuesday.

Activists behind an initiative to decriminalize currently illicit drugs and expand access to treatment services in Washington State said last week that they will no longer be pursuing the ballot due to the coronavirus pandemic. Instead, they are seeking to enact the policy change through the legislature during the next session starting January 2021.

An effort to place a psilocybin legalization measure on California’s ballot ended after the coronavirus pandemic presented petitioning difficulties and officials didn’t agree to a request to allow electronic signature gathering.

A campaign to legalize cannabis in Missouri officially gave up its effort for 2020 due to signature collection being virtually impossible in the face of social distancing measures.

North Dakota activists ended their push to place a marijuana legalization measure on the 2020 ballot and will instead seek qualification for 2022.