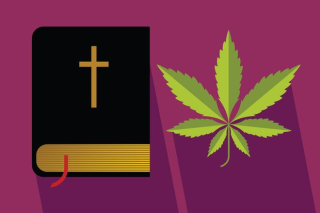 The Wall Street Journal had this recent lengthy article exploring the intersection of marijuana reforms and religious leaders.  The piece is headlined "The Word of God in the Age of Legal Marijuana" and this subheadline highlights it themes: "As more believers begin to tolerate legalization, current and former religious leaders find themselves in the middle of a debate over health, race and law enforcement."  Here are excerpts:

When it comes to marijuana legalization ... some faith leaders ... are weighing the damage the drug can do against the number of people, especially people of color, sent to prison because of it, and the benefits it can provide those in physical pain.

Polls suggest that public tolerance of the drug has gone mainstream, even in religious communities.  A September survey by the Pew Research Center found that 67% of the 2,480 Americans asked spoke in favor of legalizing cannabis, up from 31% in 2000.  The survey found a majority in favor among several religious denominations.  Even evangelicals polled slightly in favor, with 50% saying yes and 49% no....

He stands against legalization or decriminalization because he says marijuana is neither medicine nor a harmless recreational drug, and pro-legalization forces are backed by a profit-driven industry.  He calls marijuana legalization “unwise and even disastrous.”  Dr. Moore, who lives in Brentwood, Tenn., says he has counseled people with various addictions, including marijuana.  He says he sees religious leaders on the front lines of fighting marijuana and the harm it does to families, children and young adults.  “Most of the young evangelicals I know seek to minister to friends who have been harmed by marijuana culture,” he says.  “This isn’t theoretical to them at all.”

But other religious leaders find themselves in a position that would have seemed unthinkable in decades past.  Like Dr. Moore, Pastor Jamal Bryant is a clergyman with a large following and a share of critics that comes with that kind of profile.  He leads New Birth Missionary Baptist Church, an Atlanta-area African-American megachurch with 10,000 parishioners and an online viewership of more than 90,000.  It hosted the funeral of Coretta Scott King.

The pastor has created a line of cannabidiol (also known as CBD) oil-based products called Canna Blessed, organized as an LLC in Georgia.  Selling small amounts of the substance can be legal — it contains no THC, an ingredient in marijuana that provides a high.  CBD has been shown to be helpful in treating some conditions, including certain types of epilepsy, according to a 2018 report by the World Health Organization.

Pastor Bryant wants to sell Canna Blessed in church bookstores.  If THC products became legal in Georgia, he would be open to selling them, too.  “I’m not telling you God said for you to take it,” he says. But if it helps someone in the choir manage a health condition, he says the church should provide it.

Pastor Jamal Bryant says that by entering the cannabis industry he can model generational wealth for his church, congregation and community.  He insists he won’t be “getting zooted on the roof of the church” or giving out cannabis as communion.  Instead he says he wants to raise awareness about holistic medicine and entrepreneurial opportunities he intends to model for his church community. “That would really begin a larger conversation that we really need to have,” he says. “And I don’t think it can happen until it’s in our faces.”

Rev. Alexander Sharp, an ordained minister in the United Church of Christ and executive director of Clergy for a New Drug Policy in Chicago, views the question in more political terms.  He supports adult recreational use and criminal-justice reform.  And since the drug can relieve pain, he argues that legalization is an act of compassion and mercy — one that follows the example of Jesus Christ.  “The only thing that made Jesus really angry were the Pharisees that were hypocrites,” he says.  “And there are pharisaical attitudes in those who oppose drug use.”

Rev. Sharp hopes to witness an end to the war on drugs.  He believes regulation and education are the best responses to human vices, but also says the most compelling argument is for social justice.  “You can pick your numbers according to your state, but African-Americans and Latinos are three times more likely to be arrested for marijuana offenses,” he says.

History of Marijuana Laws in the United States, Political perspective on reforms, Religion, Who decides | Permalink