"States with recreational marijuana laws view the legislation as a success" 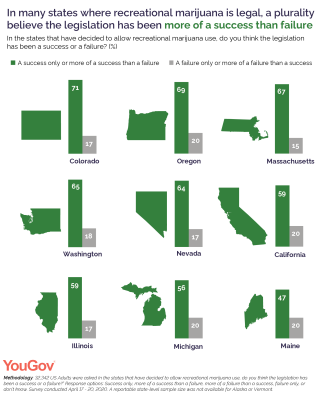 The title of this post is the title of this new article from YouGov discussing its survey that provides an interesting window into the positive impression that marijuana reform has made in states that have legalized adult-use. Here are the details:

States that have legalized recreational marijuana don’t seem likely to regret it.

That is a particularly strong belief in Colorado, where citizens were among the first-in-the-nation to vote in favor of recreational weed in 2012. Today, about a quarter (26%) of Coloradans say the state-level recreational cannabis laws have been a “success only” and another 45 percent say they have been “more of a success than a failure.” Fewer than one in five (17%) believe the laws have been “more of a failure.”...

While decriminalized marijuana and approvals for medical marijuana became popular in the 1970s and 1990s, recreational marijuana was not legalized anywhere in the United States until 2012. Now, recreational marijuana is legal in 11 states—Washington, Oregon, Nevada, California, Colorado, Michigan, Illinois, Massachusetts, Maine, Alaska, and Vermont—with more states considering the legislation this year.

The folks at YouGov did another interesting poll about marijuana back in April 2020, which is reported here under the headline "Is marijuana essential? Most Americans say yes"