"How weed became 'whatever': Leagues are ditching old policies" 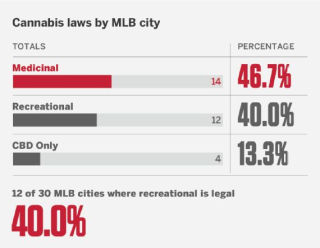 As a time with no actual sports, it is nice to have a good excuse to check out ESPN's website where one now finds this very lengthy article sharing the title of this post. The lengthy piece is worth reading in full, and here are excerpts (with my emphasis added):

The marijuana stigma that plagued [Ricky] Williams' NFL career is eroding, if not gone entirely from an enforcement standpoint.  In January, Illinois became the 11th state to legalize recreational marijuana.  Now, of the 123 teams across MLB, the NBA, NHL and NFL, 50 play in states or provinces where recreational marijuana is legal (40.6%). Another 51 teams play in jurisdictions where medical marijuana is legal (41.5%).  That's 82% of teams (101 of 123) that are playing in cities where a player can walk down the street, go into a dispensary, and legally purchase either recreational or medicinal marijuana -- just like they were buying a six pack of beer.

The only states in which any of the four major pro league teams play where there are no broad laws legalizing marijuana are Indiana, Georgia, North Carolina, Tennessee, Texas and Wisconsin.

Sports leagues have adapted.  Last year, we wrote about the NHL's marijuana approach -- predicated on treatment, not punishment -- which at the time was the most progressive in professional sports.  Today?  It's actually the norm.

The NFL ratified a new CBA in March with a drug policy quite similar to the NHL model.  The NFL significantly raised the threshold for positive tests (from 35 nanograms to 150) and eliminated its previous window of testing, which spanned from April to August to the first two weeks of training camp. In other words, if players want to smoke weed in the offseason, they are free to do so.  But most importantly: Players are no longer suspended solely for marijuana.  If a player were to test positive, his case is reviewed by a panel of medical experts who determine if the player needs medical treatment.  "Certainly, we see that society is changing its views, but views only change because key facts become more and more obvious to the people who make policy," NFLPA executive director DeMaurice Smith said.

MLB and its union negotiated a new drug policy in December 2019 following Tyler Skaggs' death.  While the new policy added testing for opioids, fentanyl and cocaine, plus synthetic weed -- with positive tests being referred to a treatment board -- cannabinoids were taken off the league's drugs of abuse list.  That wasn't a huge deal for MLB players, who were only previously tested for marijuana if there was "reasonable cause."  It was, however, monumental for minor leaguers, who were regularly tested and faced steep fines and suspensions -- including a 50-game ban for a first-time offense, 100 games for a second and a lifetime ban for the third strike.  "The way the league had the rules set up, it was ridiculous," said longtime MLBPA agent Joshua Kusnick.  "I can't even imagine how many guys' careers were ruined over marijuana. I personally had clients whose careers were derailed because of it.  If you were a fringy prospect and you were popped for marijuana, you were released because teams didn't want to deal with it.  And if you were released, you couldn't serve your suspension.  So who is going to sign you if you had 50 games to wait?"

The NBA's policy has remained the same -- and is now actually the harshest in North American professional sports.  A first positive test means a player must enter the marijuana program.  The second positive test calls for a $25,000 fine.  The third infraction is a five-game suspension, and five more games are added to each ensuing violation (10 games for a fourth positive test, 15 games for a fifth, etc.).  However, the NBA does not test players during the offseason, and the union and league agreed to not test players during the league's coronavirus hiatus.