In a post-COVID economy, will job creation and tax revenue from marijuana reform become irresistible? 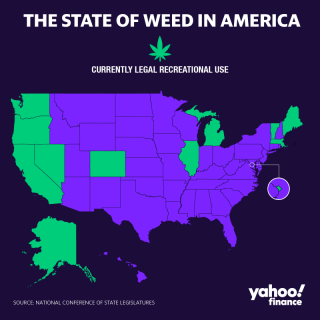 Even before we have a real handle on the public health tragedy created by the coronavirus in the US, the economic fallout is already profound as represented by just one headline this morning: "A record 3.3 million Americans filed for unemployment benefits as the coronavirus slams economy."  The Chair of the Federal Reserve is now saying "We may well be in a recession,” and the Treasury Secretary has been talking about a possible 20% unemployment rate.  Though I do not know how extreme will be our economic struggle in the weeks and month ahead, I do know that advocates for marijuana reform are likely to waste no time stressing the potential job creation and tax revenue benefits from marijuana reform.  As this title of this post suggests, I cannot help but wonder if in many states, and maybe even at the federal level, an economic development argument for marijuana reform may start to become nearly irresistible.

I do not have the time right now to do a comprehensive review of pre-COVID press pieces and articles and reports making much of the varied potential economic benefits of marijuana reform.  But this haphazard collection of titles and links provides a flavor for what I expect we will be hearing a lot from marijuana reform advocates in the weeks and months ahead:

"The Economic Benefits of Legalizing Weed"

"Legal Marijuana Is A Boon To The Economy, Finds Study"

"Why Legalizing Marijuana Could Give the U.S. Economy a Big Boost"

"The Economic Effects of the Marijuana Industry in Colorado"

"The Other Green Jobs: Legal Marijuana and the Promise of Consumption-Driven Economic Development"

DataTrek Research’s Jessica Rabe writes in a note, “there’s a simple and effective solution for states and cities to help cover their huge budget shortfalls after the COVID-19 pandemic subsides: legalize recreational sales of marijuana.”...

“We’ve been thinking a lot about how life will change post-virus, and one big difference will be that state and local governments are going to encounter large unexpected tax receipt shortages,” Rabe wrote.  “That’s particularly true when it comes to sales and income taxes amid stressed consumer balance sheets and massive layoffs. And unlike the Federal government, states can’t print unlimited amounts of money.”

Legalization of cannabis for adults, Rabe points out, could be a really easy way to shore up tax basis without driving people out of state, as raising income tax might do. Already it has been successful at raising “hundreds of millions of dollars annually in states like Colorado,” she said.