"The Controlled Substances Act at 50 Years" ... available for LIVESTREAMING 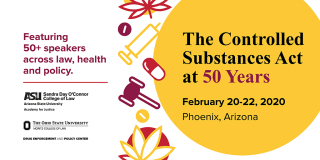 The title of this post is the title of this amazing conference taking place later this week (February 20-22, 2020) at the Arizona State University Sandra Day O’Connor College of Law in Phoenix, Arizona.  I have had the pleasure and honor of working with the amazing team at The Ohio State University's Drug Enforcement and Policy Center (@OSULawDEPC ), along with the also amazing team at ASU's Academy for Justice (@Academy4Justice), to put together an amazing and diverse array of panels and workshops on all sorts of topics relating to the past, present and future of the CSA's development, implementation and enforcement.

The basic agenda for the event can be found at this page, which should alone make you want to register here.   I am especially pleased and excited by this list of speakers who are participating.  I do not think I could overstate the amount of wisdom and insight on drug laws and policies that will be assembled in Phoenix for this event.   And here is a brief overview from the event webpage:

Roughly a century ago, in response to growing concerns about drug use, the federal government enacted its first drug control law in the Harrison Narcotics Act of 1914.  Subsequent decades saw Congress continue to pass drug control legislation and criminalize drug abuse, but by the 1960s there was growing interest in more medical approaches to preventing and responding to drug abuse.  Upon his election, President Richard Nixon prioritized the reduction of drug use: in rhetoric, he spoke of a so-called “war on drugs”; in policy, he pushed for a new comprehensive federal drug law in the form of The Controlled Substances Act (CSA), enacted as Title II of the Comprehensive Drug Abuse Prevention and Control Act of 1970.

The CSA emerged from a widespread, bipartisan view that comprehensive legislation was needed to clarify federal drug laws, and its centerpiece was a comprehensive scheduling system for assessing and regulating drugs in five schedules defined in terms of substances’ potential for abuse and dependence, and possible medical use and safety.  In design, the CSA was intended to prioritize a scientific approach to drug prohibition and regulation by embracing a mixed law-enforcement and public-health approach to drug policy.  But in practice, the US Justice Department came to have an outsized role in drug control policy, especially as subsequent “tough-on-crime” sentencing laws made the CSA the backbone of a federal drug war in which punitive approaches to evolving drug problems consistently eclipsed public health responses.

Although the federal drug war has been controversial since its inception, the CSA’s statutory framework defining how the federal government regulates the production, possession, and distribution of controlled substances has endured.   As we mark a half-century of drug policy under the CSA, the Academy for Justice at the Arizona State University Sandra Day O’Connor College of Law and the Drug Enforcement & Policy Center at The Ohio State University Moritz College of Law are together sponsoring a conference to look back on how the CSA has helped shape modern American drug laws and policies and to look forward toward the direction these laws could and should take in the next 50 years.

UPDATE: I am moving this post to the top of the page because this awesome conference starts soon and I can now provide this link with its own links to the livestream for each of the panels. I think every part of the conference will be amazing, but marijuana fans might be especially drawn to Friday (Feb 21) afternoon's "Town Hall on Marijuana in 2020: Legalization and Regulation" 3:30pm-4:30pm (Arizona Time).

I wish I could attend, esp. for the session on the CSA. I was in grad school at Rice when it was passed in 1970, and just getting interested in the marijuana issue because for the first time I saw people using it—my fellow grad students. You have probably the top expert on this—Richard Bonnie from the UVA law school, who was legal staff director of the National Commission on Marijuana, which went beyond its mandate to review whether marijuana really belonged in Schedule 1, and in 1972 voted 13-0 for decriminalization, even though nine of its members were appointed by Richard Nixon and the others were sitting members of Congress. We got Prof. Bonnie to speak at Virgina NORML’s 2013 conference, and in an email he said “It’s hard to believe that it’s taken 40 years to move the ball six inches down the field.”

I am hoping the livestream will make you feel like you are there in person! Thanks for the great comment...