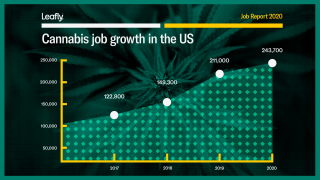 How many jobs are there in the legal marijuana industry?  Leafly’s annual Cannabis Jobs Report found 243,700 full-time-equivalent (FTE) jobs supported by legal cannabis as of January 2020.

Even in a down year, the marijuana industry added 33,700 jobs.  That’s a 15% year-over-year increase. Over the past 12 months the expanding industry has created 33,700 new jobs nationwide, making legal marijuana the fastest-growing industry in America.

Florida also saw amazing growth in 2019. With more than 300,000 registered medical marijuana patients, Florida now has the most medical patients of any state. That growth in the patient base, along with the start of smokeable flower sales, boosted Florida to a 93% increase in total sales....

California remains America’s biggest legal cannabis employer. But Colorado may be the nation’s biggest per-capita marijuana job market, with one job per 165 residents. California, by contrast, offers one job per 980 residents.

Leafly’s full report, which includes includes a state-by-state analysis of all medical and adult-use states, is available at this link.