"Could Bernie Sanders Actually Legalize Marijuana Nationwide On Day One As President?" 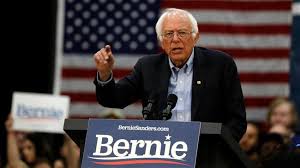 The question in the title of this post is the headline of this lengthy and effective new Marijuana Moment piece by Kyle Jaeger.  I recommend the piece in full (especially to my students), and here is how it gets started:

Sen. Bernie Sanders (I-VT) is making a bold promise: if elected president, he will legalize marijuana in all 50 states on his first day in office.  “We will end the destructive war on drugs,” the 2020 Democratic candidate said at rally days before this week’s Iowa caucus.  “On my first day in office through executive order we will legalize marijuana in every state in this country.”

But while the pledge has been largely welcomed by reform advocates and cannabis enthusiasts, some experts question whether such immediate, sweeping action is legally or practically achievable.

The use of executive orders at the start of a presidency isn’t unprecedented — President Obama signed one aimed at shutting down the controversial Guantanamo Bay prison the day after he assumed office and President Trump issued an order scaling back Obamacare, for example — but there are unique challenges associated with a presidential move to unilaterally remove cannabis from the Controlled Substances Act (CSA).

To effectively end marijuana prohibition through the executive branch, according to an analysis from the Brookings Institution’s John Hudak, the secretary of the Department of Health and Human Services (HHS) or an outside party would have to file a petition, which would then be reviewed by the attorney general, who has usually delegated that responsibility to the Drug Enforcement Administration (DEA).  The attorney general can also initiate the process on their own, requesting a scientific review directly to HHS. Under HHS, the Food and Drug Administration (FDA) would then assess the scientific, medical and public health implications before submitting that review to the Justice Department.

Thus, changing marijuana’s classification under federal law without an act of Congress is far more complicated than a single stroke of a presidential pen.  While Sanders could theoretically make supporting descheduling a condition of nominating candidates to be HHS secretary or attorney general, it’s virtually certain he would not have those officials installed on day one of his presidency.

The new day-one, executive action proposal is a far more ambitious plan than the one Sanders previously floated. Last year, the senator said he’d take a systematic approach to legalization that would involve naming cabinet members who will “work to aggressively end the drug war and legalize marijuana” within 100 days of his taking office.

But it appears the timetable has changed, with top aides reportedly including marijuana legalization in a list of possible executive orders — though Sanders has yet to formally sign off on them.  Some experts are skeptical that this latest plan has legs, and some feel it reflects Sanders’s political desire to stand out as the most marijuana friendly candidate, rather than an earnest attempt to expedite the descheduling process.

Bernie Sanders can remove all PENALTIES both state and federal, and give a blanket pardon to every single marijauna user in prison or on probation across the entire nation.

How long have you been a lawyer for?

He can also IN it's entirety and unilaterally abolish the DEA. He can also direct the EPA to declare a climate emergency that would remove penalties for growing CO2 intensive marijuana to help "Clean the air".
He can declare that the war on drugs is OVER, and remove every single dime from law enforcements efforts to enforce marijuana laws.

Not to mention the amount of money that the federal government gives to local municipalities to enforce marijuana laws, that Bernie can ALSO remove.

Those come in the form of grants from the executive.

Here, read this and inform yourself so you will be a better lawyer that isn't inclined to post ridiculous BS. (Just in case you find my previous posts claims to be questionable).

Presidential reorganization authority is designed to allow periodic refinement of the organizational efficiency of the government through significant and sweeping modifications to its architecture that might otherwise be too substantial to realistically implement through a parliamentary process.

Being that all spending bills must get approval from the US House of Reps. and being that the Democrats have control of the US House.... How likely do you think Democrats would go against Bernie in abolishing the DEA?

Appreciate your engagement, Matt, but I trust you realize that even abolishing the DEA does not in any ways undercut STATE prohibitions on marijuana and other drugs. The vast majority of drug arrests and prosecutions are on the state level, and changes to the federal regulatory/enforcement apparatus does not itself affect a change in state laws (though it sure would impact state practices over time).