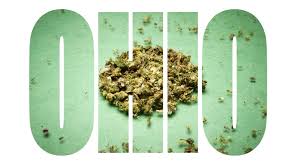 Throughout the first part of 2019, I thought it quite likely that there would be at least an attempt to bring a full marijuana legalization initiative to Ohio voters in 2020.  But as 2019 marched forward and as I heard that some Ohio medical marijuana industry players were against such an effort, I concluded that the Buckeye voters were going to have to wait until at least 2022 to weigh in again on recreational marijuana.  But, to my surprise, this news broke this week: "Ohio petitioners want to put recreational marijuana on the fall ballot."  Here are the basics and some context:

Advocates of adult marijuana use, which includes some licensed Ohio medical marijuana companies, are working on letting citizens vote on recreational marijuana this fall.

But an initiative to bring a referendum before voters this November will face an uphill battle, as it may be challenging to collect the signatures needed by a July deadline to get a measure on this fall's ballot.  Presidential elections historically draw the greatest voter turnouts, which is why it makes sense strategically to bring out a marijuana legalization referendum at that time despite the time crunch.

According to the Cincinnati Enquirer, which says it's seen a copy of the petitions, the proposed constitutional amendment would "allow anyone 21 and older to buy, consume and possess up to one ounce of marijuana and grow up to six marijuana plants."  Additionally, the Enquirer reported that "Ohio's existing medical marijuana businesses would have first dibs on the recreational market beginning in July 2021.  State regulators could decide to issue additional licenses."

Working on the initiative are reportedly Frantz Ward attorney Tom Haren and Mike Hartley, a Republican consultant based in Columbus.  Haren represents multiple marijuana companies in Ohio and is the executive vice president of the Ohio Hemp Association trade group.

Matt Close, executive director of the Ohio Medical Cannabis Industry Association, which includes about 15 members, said the trade group is aware of the petitions but is not backing any legalization measure, at least not yet. "From the association standpoint right now, we are not backing any sort of initiative," Close said. "We are trying to fix the current program."...  Nonetheless, while it's currently unclear who's supporting the legalization initiative, sources say the group does include some current Ohio medical marijuana license-holders.

According to the Ohio attorney general's office, a statewide total of 442,958 signatures would be required from at least 44 of the state's 88 counties to file a ballot initiative.  That number is particularly high because of the high voter turnout in the last gubernatorial election.  Petitions can be tricky because a number of signatures will inevitably be marked invalid.  Collecting nearly 443,000 valid signatures means petitioners would likely want to collect double the required number to be safe.  If initial petitions are filed with the state later this week, the initiative would have just four months to collect signatures before the July 1 deadline. A successful campaign would probably take several million dollars of financial support.

The last marijuana referendum brought before voters was Issue 3 in 2015.  While that would've established a recreational market, the amendment would've provided for only 10 cultivators chosen by backers of the bill, including '90s boy-band singer Nick Lachey of 98 Degrees.  Critics, including the state, which worried about losing control of the marijuana situation, framed Issue 3 as a monopoly on the lucrative cultivation business.  While not a literal monopoly, the idea was that one group of investors working together would effectively gain unilateral control over who would be allowed to grow medical pot and where in the Buckeye State.  That left many marijuana advocates unimpressed.

H.B. 523 followed in 2016 as a way for lawmakers to create a strictly regulated medical marijuana industry after seeing a recreational industry nearly willed into existence. Former Gov. John Kasich eventually signed that bill to little fanfare.  Medical marijuana sales in Ohio started in January 2019.  The state saw $58.3 million in total sales in that first year, a good deal less than comparable markets in their inaugural years.

I am very much looking forward to seeing the details of the petition, which should be out this week or next, and also seeing of the organizers will have the resources to collect the signatures needed to actually get the petition to the ballot. Stay tuned.