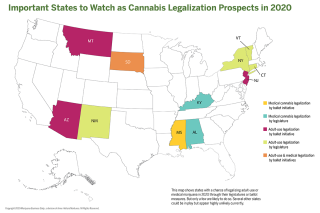 Jeff Smith over at MJBizDaily has this helpful article (with a helpful graphic) under the headline "Several states could legalize cannabis sales in 2020 as marijuana industry eyes lucrative East Coast market."  The article maps out the ten or so states that might move forward with adult-use legalization regimes in 2020 and also reviews the handful of states in which medical marijuana legalization might move forward this year.  Here is a snippet from the start of the piece:

Up to a dozen states could legalize adult-use or medical marijuana in 2020 through their legislatures or ballot measures, although only about a handful will likely do so.

Much of the cannabis industry’s focus will home in on a possible recreational marijuana domino effect along the East Coast, which could create billions of dollars in business opportunities.  Adult-use legalization efforts in New York and New Jersey stalled in 2019, but optimism has rekindled this year.

Potential legalization activity runs from the Southwest to the Dakotas to the Deep South. Mississippi in particular has a business-friendly medical cannabis initiative that has qualified for the 2020 ballot.

If even a handful of these state marijuana reforms move forward this year, it becomes that much more likely that some form of federal reform will have to follow. That reality is one of the theme of this lengthy new Politico article which also provides an accounting of potential state reforms under the full headline "Marijuana legalization may hit 40 states. Now what?: Changes in state laws could usher in even more confusion for law enforcement and escalate the pressure on Congress to act." Here is an excerpt:

More than 40 U.S. states could allow some form of legal marijuana by the end of 2020, including deep red Mississippi and South Dakota — and they’re doing it with the help of some conservatives.  State lawmakers are teeing up their bills as legislative sessions kick off around the country, and advocates pushing ballot measures are racing to collect and certify signatures to meet deadlines for getting their questions to voters.

Should they succeed, every state could have marijuana laws on the books that deviate from federal law, but people could still be prosecuted if they drive across state lines with their weed, because the total federal ban on marijuana isn’t expected to budge any time soon.  The changes could usher in even more confusion for law enforcement and escalate the pressure on Congress to act.  Federal bills are crawling through Congress, with Senate Majority Leader Mitch McConnell firmly against legalization....

“We’re cautiously optimistic that we can win more marijuana reform ballot initiatives on one Election Day than on any previous Election Day,” said Matthew Schweich, deputy director of the Marijuana Policy Project.  Schweich cited growing public support for the issue among both liberals and conservatives.  The measures that make the ballot could drive voter turnout at the polls and by extension affect the presidential election.

Liberal states that allow ballot petitions have largely voted to legalize marijuana, including California, Oregon and Massachusetts.  “Now, we’re venturing into new, redder territory and what we’re finding is voters are ready to approve these laws in those states,” said Schweich, who, along with leading legalization campaigns in Maine, Massachusetts and Michigan, served as the co-director of the medical marijuana legalization campaign in Utah.  “If we can pass medical marijuana in Utah, we can pass it anywhere.”

National organizations like his are eschewing swing states like Florida and Ohio, where the costs of running a ballot campaign are high during a presidential election. They are intentionally targeting states with smaller populations.  For advocates, running successful campaigns in six less-populous states means potentially 12 more senators representing legal marijuana states.  “The cost of an Ohio campaign could cover the costs of [four to six] other ballot initiative campaigns. Our first goal is to pass laws in as many places as we can,” Schweich said.

They can’t take anything for granted, however.  In Florida, where polling says two-thirds of voters want to legalize pot, one effort to gather enough signatures for a 2020 ballot measure collapsed last year, and a second gave up on Tuesday, saying there’s not enough time to vet 700,000 signatures.  Organizers are looking to 2022.  And many legislative efforts to legalize marijuana came up short in 2019, including in New York and New Jersey.  Those efforts were derailed in part over concerns about how to help people disproportionately harmed by criminal marijuana prosecutions, despite broad support from Democratic-controlled legislatures and the governors.

I fully understand the strategic and economic reasons why MPP and other national marijuana reform activist groups have chosen not to focus on big purple states like Florida and Ohio for full legalization campaigns. But these two states have unique long-standing and well-earned reputations as national swing states. Only if (when?) these kinds of big (reddish-purple) states go the route of full legalization will I think federal reform becomes unavoidable.