Is rooting for Bengals or Browns a sign of insanity or really just a medical marijuana qualifying condition? 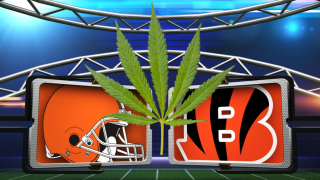 I moved to central Ohio from the east coast in 1997.   I had my reasons to start following the Cincinnati Bengals upon first arriving in the Buckeye state (I grew up in Maryland in the 1980s and formed a connection with Boomer Esiason).  And I could not help but also be keen on the Cleveland Browns when the team returned to action in 1999.  But, fast forward 23 years, and I have not seen either of Ohio's professional football teams even manage to win a single playoff game over this very long period.  (Do not feel too bad for me, the OSU Buckeyes have given me plenty of victories to savor.)

Why do I tell this familiar tale of sporting woe in this space.  Well, this amusing Cincinnati Enquirer article, headlined "Bengals, Browns seasons got you down? Medical marijuana proposed as treatment," reports on why it is relevant to the work of marijuana reform in the Buckeye state:

Long-suffering Bengals and Browns fans know the pain of defeat — over and over again. At least one person thinks they should be able to treat that misery with medical marijuana.

A petition to make "Bengals/Browns Fans" an official medical marijuana condition was submitted last month to the State Medical Board of Ohio.

Don't get your hopes up: It probably won't go anywhere. The board requires information from experts who specialize in studying the condition, relevant medical or scientific evidence and letters of support from doctors.

The board could not provide more information Monday about the petition, including who submitted it and their argument for why the board should add the "condition."

Last year, more than 100 petitions for new conditions were submitted. Those were winnowed to five: anxiety, autism spectrum disorder, depression, insomnia and opioid use disorder. All five were rejected by the board.

This time around, the board received 28 petitions. The latest batch includes conditions already approved in Ohio, such as chronic pain and PTSD. Petitions were again submitted for the conditions rejected last year. Repeat petitions must include new "scientific information" to be considered again.

Rob Ryan, who heads pro-cannabis coalition Ohio Patient Network, re-submitted a petition for opioid use disorder but he doesn't expect a different outcome. Ryan, who lives in Blue Ash and sometimes roots for the Bengals, didn't have a strong opinion of the football fan condition idea. "Maybe they should sell marijuana as well as beer at the stadium," Ryan said, chuckling. "It might calm the crowd down."  But he hopes his proposal has a better shot.

Medical board attorneys will review the petitions to determine whether they meet the minimum requirements, such as including letters from supporting physicians.  A medical board committee plans to decide in February which conditions will be reviewed by experts and voted on by the board later this year.

Gotta smoke one after a Who Dey loss :/
https://teespring.com/cin-ohio-cincinnati-legalize