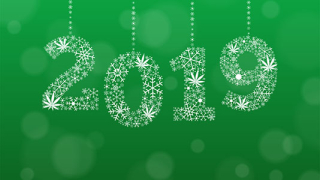 This holiday season has brought not only the usual "year in review" pieces, but also a number of "decade in review" accountings of big changes since the start of 2010.  Interestingly, I have not seen too many "decade in review" pieces focused on marijuana reform developments even though so much has happened in this space since 2010.  This new NBC News piece by Zachary Siegel, headlined "Opioids, pot and criminal justice reform helped undermine this decade's War on Drugs," covers some of this ground in a broader context.  Here is an excerpt:

If shame was a potent force in fighting against the company that oversold opioids, it was the shedding of stigmas that characterized the massive shift in public opinion toward marijuana in the past decade — which transformed more than that on just about any other policy across the American landscape.  In 2000, 63 percent of Americans said the use of marijuana should be illegal, according to polling from Pew Research Center.  By 2010, that number had dropped to 52 percent, and for the last 10 years it continued to plunge, shifting the balance in favor of marijuana. In 2019, a full two-thirds of Americans believed cannabis should be legal.

There is no way to characterize this but as a loss for the so-called War on Drugs.  Marijuana not only continued to be consumed — with nearly 55 million people who indulge, it’s one of the most widely used drugs — but now, thanks to the legalization drive, there’s a chance to right wrongs of the past.  For instance, once legalization goes into effect in Illinois on Jan 1, 2020, the city of Evanston will use tax revenue on cannabis to fund reparations for black residents....

So how did 80-year-old cannabis laws finally begin to crumble this past decade?  Though very different in properties and ill effects, marijuana’s image shifted for some of the same reasons that opioids changed the drug conversation in America: White people being criminalized, the medical industry having a role in how to calibrate use of the drug, and a feeling among both liberals and conservatives that filling up jails with users was a waste of lives and money.

Cannabis laws didn’t change all by themselves, and it’s important to recognize the role that grass-roots advocacy played.  “The remarkable progress of marijuana legalization over the past decade was driven not by for-profit interests but by people and organizations who care first and foremost about freedom, justice, compassion and human rights,” said Ethan Nadelmann, the founder and former director of the Drug Policy Alliance, the nonprofit that helped get cannabis on the ballot in numerous states.

There is, of course, so much more to say about the past decade in marijuana reform, way too much to say in a single book, let alone a single blog post.  Rather than try to cover all that ground, I will be content here to just link to a number of 2019 "year in review" pieces about marijuana reform:

From MG Magazine, "The Evolving Cannabis Industry: a 2019 Year-End Review"

From The Hill, "2019 was a historic year for marijuana law reform — here's why"

And from the Dayton Daily News, "Ohio medical marijuana: What happened in the first year"