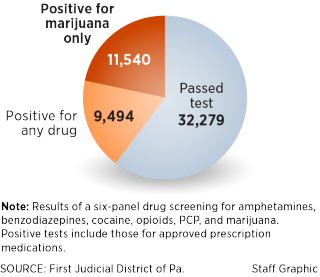 The Philadelphia Inquirer has this notable new article under the headline "The Marijuana Paradox: Philadelphia Has Decriminalized Marijuana, But Those Who Get High On Probation Still Risk Incarceration." I recommend the lengthy article in full, and here are some excerpts:

District Attorney Larry Krasner announced his office would not charge people with marijuana possession, or seek to revoke probation for use of the drug.  Medical-use cannabis dispensaries are popping up across the city.  And the lieutenant governor, crisscrossing the state on a listening tour, reported that the Wolf administration and a majority of the public support legalizing recreational use.

Even as most Philadelphians are free to get high with impunity — facing at worst a $100 fine — judges and probation officers continue to punish people for using the drug, resulting in court-mandated treatment, extended probation, and even incarceration.

It’s one factor contributing to Philadelphia’s bloated levels of community supervision and of incarceration — which are among the highest of any big city and come at an enormous cost.  Philadelphia spends more than twice as much per capita as other cities on corrections, and nearly twice as much on judicial and legal costs.

And it is a significant factor, going by the results of 53,313 drug tests administered by the Philadelphia adult probation department in 2018.  The majority of those tests were negative for any drug — but among the failed screens, about half were positive for marijuana alone, according to court data. That’s more than 11,000 tests flagged just for weed.

Philadelphia City Council held a hearing in February to examine the possibility of ceasing testing, but city leaders have so far been reluctant to move ahead of state law. Probation-reform legislation proposed in the state House would not bar testing but would prohibit courts from violating people for using marijuana if they have medical authorization.

Philadelphia’s chief defender, Keir Bradford-Grey, called marijuana screening a waste of resources that doesn’t make the city any safer: “Many of them are using it for PTSD and trauma. Many of them are using it for pain.  So these reasons are benign in terms of our notion of public safety — and this is why we are creating an endless cycle of probation for people who are being tested this way.”

And, at a time when the opioid crisis is killing more than a thousand people each year in Philadelphia, the courts’ most intensive drug-treatment and diversion programs are squandered on marijuana users.  For instance, just 18% of those coming out of Philadelphia Drug Treatment Court in 2018 were opioid users; 75% were marijuana users....

One way some jurisdictions are avoiding such outcomes is to simply stop testing for marijuana. Among them, New York City this year enacted a law barring its probation department from testing for marijuana in almost all cases.  But in Pennsylvania, probation officials and judges continue to craft their own — often conflicting — responses to marijuana use.

In September, Lebanon County Probation prohibited use even for those with medical marijuana cards.  For people on probation who were managing health conditions with marijuana, the consequences were in some cases severe.  One woman, Melissa Gass, 41, stopped using the drug to manage her epilepsy after her probation officer told her continued use would put her in violation. Soon, she was experiencing six or seven seizures a day.

In October, the ACLU of Pennsylvania sued on behalf of Gass and two other people on probation, and the state Supreme Court agreed to exercise its extraordinary King’s Bench authority — a power reserved for matters of “immediate public importance” — to review the case and temporarily bar Lebanon County from implementing its policy.  “We are reading this as a statewide injunction,” said Vic Walczak, legal director of the ACLU of Pennsylvania, which has identified six other counties — Elk, Forest, Indiana, Jefferson, Lycoming, and Northampton — that ban medical marijuana for those on probation.

But there’s no immediate relief for people like Jacob Makaravitz, 29, who are already incarcerated on probation violations.  This fall, he went to a doctor and obtained a medical marijuana card to manage his nerve pain, but failed to get his probation officer’s permission.  In October, a Lackawanna County judge sentenced him to one to three years in state prison for the unauthorized use.

James McGurl, 31, who was in drug court with Makaravitz, learned of his friend’s incarceration with alarm.  “It’s just pure insanity. You can sentence someone one to three years for a medical marijuana card prescribed to him by a doctor,” McGurl said. McGurl himself is a former heroin user who got clean through a 12-step program. “Marijuana has been a great help and aid to me in my recovery,” he said — but it was a marijuana charge that saddled him with a felony conviction and a sentence to intermediate punishment.  “Oddly, after I finally got clean, I ended up in jail and on drug court,” he said.  “Where were they when I was robbing people’s houses and being a total scumbag?”

In Philadelphia, the court accepts medical marijuana cards, but probation administrators and judges have conflicting ideas about how to deal with those who use marijuana without authorization, according to Laurie Corbin of the Public Health Management Corp., which holds an $8 million contract with the city to provide assessment and treatment for court-ordered clients.  “There’s a real concerted effort not to be bringing people in [to jail] with charges related to marijuana,” she said, “but then there are other behaviors related to marijuana use, where [they’re] breaking and entering or doing other kinds of crime.”....

Nationwide, more people receive court-ordered referrals into drug treatment for marijuana than any other kind of drug — 126,000 of them in 2017, according to the U.S. Substance Abuse and Mental Health Treatment Administration.  More than half of all marijuana users in treatment are forced to go there by the criminal justice system. Notably, while just 13% of those in drug treatment in Pennsylvania are African American, 29% of those in treatment for marijuana are black.

Yet, a national epidemiological survey found that, as marijuana use has proliferated, the prevalence of marijuana-use disorders, described as abuse of or dependence on the drug, remains below 3% of adults nationwide.  That represents about three out of 10 marijuana users.  Statewide, 22% of people in drug treatment courts are marijuana users, but that number rises to 57% in Chester County and 75% in Philadelphia.

These programs are seen as a means to keep people out of jail while enforcing treatment.  But in reality, about one in three participants in these diversionary programs will be incarcerated as a sanction for repeated positive drug tests, missed court dates, or failure to attend treatment, an Inquirer review of court data from Philadelphia and surrounding counties shows.  Six out of 10 people leaving drug court in Pennsylvania graduate successfully; those who fail can face sentences of probation, jail, or even state prison.

Despite the potential for harsh consequences, some are grateful for the counseling that judges and probation officers provide. They say they need other coping mechanisms besides dulling trauma with marijuana, and court-ordered counseling or treatment may provide those skills But to those who flounder under the strictures of drug treatment court, it feels like a trap.