"The Cannabis Effect on Crime: Time-Series Analysis of Crime in Colorado and Washington State" 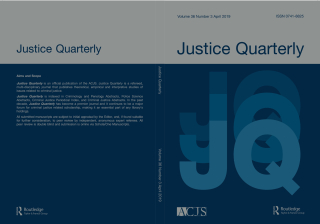 The title of this post is the title of this notable new research by multiple authors just now published in the journal Justice Quarterly.  Here is its abstract and part of its conclusions:

Previous studies based on relatively weak analytical designs lacking contextualization and appropriate comparisons have reported that the legalization of marijuana has either increased or decreased crime.  Recognizing the importance for public policy making of more robust research designs in this area during a period of continuing reform of state marijuana laws, this study uses a quasi-experimental, multi-group interrupted time-series design to determine if, and how, UCR crime rates in Colorado and Washington, the first two states to legalize marijuana, were influenced by it.  Our results suggest that marijuana legalization and sales have had minimal to no effect on major crimes in Colorado or Washington.  We observed no statistically significant long-term effects of recreational cannabis laws or the initiation of retail sales on violent or property crime rates in these states....

Authors of previous studies (Berenson, 2019; NHIDTA, 2016; Smart Approaches to Marijuana. (2018) argue that legalization is associated with an increase in crime.  Our results suggest that cannabis laws more broadly, and the legalization of recreational marijuana more specifically, have had minimal effect on major crime in Colorado or Washington State.  We observed virtually no statistically significant long-term effects of recreational marijuana legalization or retail sales on violent or property crime rates, except for a significant decline of burglary rates in Washington.  There were some immediate increases in crime at the point of legalization, but these did not result in long-term effects.  It is difficult to study trends for less serious crimes, as the UCR only includes arrest data for these offenses and not offenses known.  Though NIBRS data presents an attractive alternative, not all of Washington is NIBRS compliant and many of the agencies that are reporting NIBRS data have not done so for a long enough period of time pre-legalization for time series modeling to be examined.  Still, the results related to serious crime are quite clear: the legalization of marijuana has not resulted in a significant upward trend in crime rates.  Our results are robust in that we examined the first two states to legalize marijuana and compared them to states with no marijuana laws at all.  Moreover, we estimated our models in a variety of manners, including models with different interruption points, single-group interrupted time series analyses, and as a set of pooled cross-sectional models. None of our models revealed long term effects of marijuana legalization on serious crime rates.

"Our results suggest that cannabis laws more broadly, and the legalization of recreational marijuana more specifically, have had minimal effect on major crime in Colorado or Washington State."

would you expect the same to hold true in other states that have legalized pot such as New York?