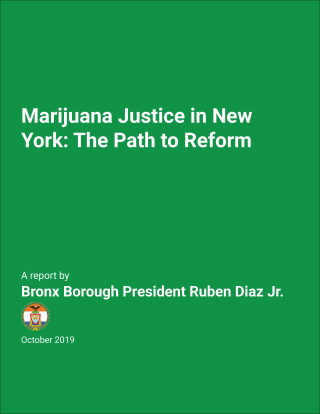 I was intrigued to see this short but compelling report released this week by Bronx Borough President Ruben Diaz Jr. titled "Marijuana Justice in New York: The Path to Reform." The report gives special attention to issues of criminal justice reform and economic empowerment, and here and the report's six recommendations as set forth in its executive summary:

Proposal 1: Community Reinvestment. Low-income and minority communities across the state that have been disproportionately affected by past marijuana criminalization should see the benefits of legalization. Some of the revenue from legalization should be returned to these communities in the form of grants and other opportunities.

Proposal 2: Second Chances for Job Applicants who Fail Drug Tests for Marijuana. Many New Yorkers have failed drug tests for marijuana in the past, which has prevented them from getting a job. Employers should be encouraged to call these job-seekers back for future openings, and services should be available to help these individuals find employment.

Proposal 3: Equity in Licensing. The marijuana industry in New York State should reflect the population of New York State. The state should ensure that licenses are granted to qualified equity applicants so that those harmed by marijuana criminalization will be able to benefit from its legalization. The licensing system should ensure that small and minority-owned businesses are able to participate in the industry so that large, out-of-state companies cannot box them out.

Proposal 4: Access to Capital and Banking Services. Currently, banks are reluctant to engage with the marijuana industry. The state should ensure access to funds for small marijuana businesses so that the industry is not dominated by larger businesses that do not reflect the diversity of the state. New York State should advocate for Congress to pass a law protecting financial institutions from prosecution for legal cannabis-related activities.

Proposal 5: Automatic Expungement. The decriminalization bill introduced an expungement mechanism in New York State for the first time and provided that low-level marijuana offenses could be expunged. A legalization bill must make more former marijuana offenses subject to expungement as well. Past criminal convictions limit opportunities, and the enforcement of marijuana laws has fallen disproportionately against minorities and low-income communities.

Proposal 6: Ending Family Separations because of Marijuana. Currently, a positive drug test for marijuana is sufficient to start a child neglect investigation. No families should be broken apart because a parent, particularly a new parent, tests positive for marijuana.

I have to disagree with proposal #2

As a job applicant you need to be responsible and not high from the past night or two. An employer has just put in time and effort to interview you and considered you for employement.

So why would you be so stupid for smoking a joint prior to having your drug test.