US House of passes SAFE Banking Act by a vote of 321-103, but Senate vote still seems unlikely 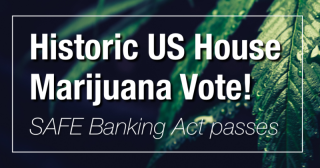 The Democratic-controlled House of Representatives late Wednesday voted to pass a bill protecting banks that work with the marijuana industry, but some analysts are warning that the measure isn’t likely to become law in 2019 as it faces a tough road in the Republican-controlled Senate.

The chances of enactment this year for the bill — known as the Secure And Fair Enforcement (SAFE) Banking Act — have risen to 1 in 3, up from 1 in 5, reckons Ian Katz, an analyst at Capital Alpha Partners. Those still aren’t great odds, however.  “We remain skeptical for now,” Katz said in a note before the House vote, though he added that the chances could get better “if we see meaningful signals from the Senate in the next few weeks.”

The bill aims to give clarification to banks and credit unions that serve cannabis companies with, for instance, business accounts for bill paying. Currently, financial institutions face legal problems because marijuana remains illegal on the federal level, even as more states legalize it.  Lobbyists have emphasized that many cannabis businesses end up “unbanked” and operating largely in cash, and that makes them targets for robberies and other crimes.

Influential Republican Sen. Mike Crapo gave some hope to the SAFE Banking Act’s supporters earlier this month, as the Senate Banking Committee chairman told Politico that he wanted to hold a committee vote before the year’s end on a cannabis banking bill. There are no additional details on the potential timing for such a vote, said a spokeswoman for the Idaho lawmaker on Monday.  Crapo had sounded noncommittal on the issue at a July hearing.

The SAFE Banking Act “has been sweetened for Republicans,” Katz said. One provision would prevent the return of Operation Choke Point, an Obama-era program that Crapo mentioned at the July hearing and that involved investigating banks for doing business with payday lenders and firearms dealers. Another new provision aims to protect financial firms that serve the hemp industry, which is a force in Kentucky, the home state of Senate Majority Leader Mitch McConnell.

But McConnell continues to look like he could serve as a big roadblock to the bill. He described marijuana last year as hemp’s “illicit cousin which I choose not to embrace.” “There’s a line of thinking that McConnell could go along with a pot banking bill to help Republicans in the 2020 elections,” Katz said.  “The tough re-election prospects of Republican Sen. Cory Gardner [a co-sponsor of the bill] of marijuana-friendly Colorado are often cited.  But the benefit to Republicans, especially in the West and South, of supporting a bill that’s at least superficially pro-marijuana, is debatable.”

At the other end of the political spectrum, the bill had faced opposition ahead of Wednesday’s House vote from several progressive groups, such as the Center for American Progress, the American Civil Liberties Union and others.  In a letter to top House Democrats, the groups criticized the efforts to advance a bill that just addresses banking issues, but does not help “communities who have felt the brunt of prohibition,” yet have been “shut out” of the growing industry.  Their concerns didn’t end up stopping the House from passing the measure.

Wednesday’s vote happened under a suspension of House rules that limited debate and meant that two-thirds of the lawmakers present and voting needed to back the measure.  The vote tally was announced as 321 in favor vs. 103 against....

Many players in the cannabis industry say banking-related legislation will become law at some point in the next few years, even if 2019 doesn’t bring the action that they hope to see.  “I’m fairly confident that either the SAFE Act or STATES Act will be passed,” said Rob DiPisa, co-chair of law firm Cole Schotz’s Cannabis Law Group. “I think the industry has come too far.  The cat’s out of the bag, and it’s not going to disappear, so banking needs to happen.”