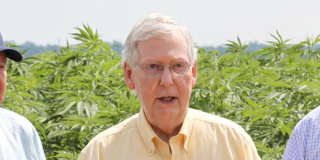 In prior posts here and here I have highlighted ways in which hemp and other cannabis reforms have made marijuana enforcement ever more challenging for law enforcement. Politico has this new lengthy article covering these realities with a spotlight on Senator Mitch McConnell's central role in hemp reform under the headline "Marijuana Mitch? How McConnell’s hemp push has made pot busts harder." Here are excerpts:

Mitch McConnell’s big victory for his home state hemp industry may have made it easier for people busted for marijuana to get off the hook.

Last year, McConnell pushed to get a provision legalizing hemp into the farm bill.  His goal was to spur hemp farming across the country and boost farmers in his home state of Kentucky who have been battered by a loss in federal tobacco subsidies.

But here’s the catch: Hemp and marijuana products both come from the same plant, cannabis, which makes it nearly impossible for the average cop to tell the difference.  As states rushed to change their hemp laws to capitalize on the federal changes, many municipalities are giving up on small-time pot busts because of a lack of reliable testing.  Under federal and most state laws, hemp can’t be more than 0.3 percent THC, the psychoactive compound that triggers a high.  Before hemp was legal, police only had tests that could detect the presence of THC, not how much.

Now that cannabis with less than 0.3 percent THC is legal, a growing number of prosecutors are requiring lab tests to bring charges. The mere presence of THC is no longer enough.

For example, in Texas, prosecutors were shocked by Republican Gov. Greg Abbott’s embrace of a hemp bill in June, said Paul Fortenberry, the narcotics division chief in the Harris County district attorney’s office.  The new law led to several district attorney’s offices to set policies requiring lab testing in marijuana cases.  Hundreds of people across the state happily had their cases dismissed.

In Ohio, Columbus City Attorney Zach Klein’s office announced in August that it would stop prosecuting misdemeanor marijuana possession cases entirely after Republican Gov. Mike DeWine signed the state’s hemp legalization bill.  “I was not opposed to the law because of what it meant for Ohio farmers,” Klein said.  “Our farmers have been particularly hit by President [Donald] Trump’s trade war with China so it’s a positive thing for our state … but it still doesn’t mean there aren’t unintended consequences of this law.”

The localities where changes have already been made are likely just the first of many.  “It is a national issue.  This is not anything that is limited to just a few states,” said Duffie Stone, a South Carolina prosecutor and president of the National District Attorneys Association.

Hemp backers including McConnell, especially in conservative-leaning states, frame the hemp legalization issue as an agricultural one.  The crop cannot be consumed as an intoxicating drug, and it can help otherwise struggling farmers access a booming global market worth $3.7 billion in 2018.

But the issue of hemp cuts across several issues.  It’s exactly this focus on agriculture that caught prosecutors off guard in the first place — the hemp bill in Texas went through the agriculture committee.  “Typically when we have a criminal justice bill, it will come through the criminal justice committee,” Fortenberry said.  “Legislatures are seeing that other states have hemp programs worth tens or hundreds of millions of dollars, and they don’t want farmers in their state to get left behind,” he said.  “But in the process of doing that, I don’t think that they foresaw this unintended consequence.”

Earlier this year, South Dakota’s legislature passed a hemp legalization bill that Republican Gov. Kristi Noem promptly vetoed, arguing that it would undermine marijuana enforcement.  While lawmakers fell a few votes short of overriding her veto, they have vowed to try again in 2020.

“I find hard to believe [McConnell] would have moved [hemp legalization] in the same way had he been thinking about all these different implications,” said Melissa Moore, deputy state director of the Drug Policy Alliance, an advocacy group that aims to reduce criminalization in drug policies.  McConnell has previously opposed efforts to liberalize marijuana laws and didn’t return requests for comment for this report.

The farm bill essentially legalized hemp by removing it from the definition of marijuana under federal drug laws. Regulatory agencies haven’t finalized rules for the newly legal industry, however, leaving the nearly $2 billion industry built on the hemp derivative CBD in a regulatory limbo. CBD is a trendy cannabis compound used for relieving anxiety, pain, inflammation and more, though research on its efficacy is slim.  Hemp cultivars generally contain higher amounts of CBD and trace amounts of THC.  Its industrial applications abound: Hemp is gaining attention for its environmental friendliness and can be used in textiles, construction, biofuels, and more....

CBD-rich hemp flowers often look and smell the same as marijuana flowers that are high in THC. “Testing before didn’t distinguish the quantity of THC,” said Dallas County District Attorney John Creuzot.  Without some sort of lab results showing that the substance had more than the legal limit of THC, “it just didn’t make any sense to accept the case.”

Texas lawmakers were so dismayed by marijuana cases being tossed out that they wrote a letter to local prosecutors arguing that lab tests aren’t required in every case.  “Criminal cases may be prosecuted with lab tests or with the tried and true use of circumstantial evidence,” read the letter signed by the governor, lieutenant governor, House speaker, and state attorney general.

Some smaller DA offices in the state agree. A spokesperson for the El Paso DA’s office sent a statement pointing to a provision of the Texas Health and Safety Code for its decision to continue prosecuting marijuana cases without lab results. But prosecutors in the state’s more populous counties have a different view. “In this day and age, when you have the actual ability to determine whether something is a certain substance, juries expect you to bring you that evidence,” Fortenberry said.

But the lack of testing equipment to differentiate between hemp and marijuana has overwhelmed state crime labs and using private labs can be pricey for local authorities.  Some local police departments are exploring a roadside test from Switzerland, where cannabis under 1 percent THC is legal.  In Florida, more sophisticated testing is coming soon to law enforcement agencies in the Sunshine State: An agriculture official told the Industrial Hemp Advisory Council that a new THC field test will cost $6.50 per test.

Ohio bought equipment that isn’t yet online, said Klein, but it will eventually allow the state Bureau of Criminal Investigation to test suspected marijuana samples.  When testing becomes available, prosecutors in the state also will have a two-year statute of limitations to contend with....

Creuzot said police officers often file marijuana cases anyways, despite knowing that his office won’t pursue the charges. “They arrest the person [and] take them to jail....  I don’t have any control over that if that’s what they want to do,” he said.  “An arrest in and of itself, even if the case is dismissed, can still have life-altering effects for somebody,” said Moore, of the Drug Policy Alliance, listing the potential consequences: barriers to employment opportunities, loans for higher education, affordable housing, and family law and immigration implications.