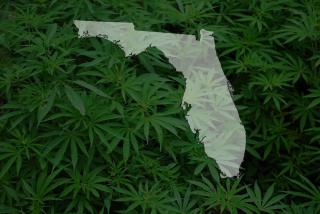 The question in the title of this post is my first thought in reaction to this local news piece headlined "With Petition Milestone, Recreational Marijuana Is One Step Closer in Florida."  Here are the details:

[W]ith activists pushing to get recreational weed on the 2020 ballot in Florida, the possibility of legalization now seems likelier than ever.  Yesterday the advocacy group Regulate Florida announced its petition to legalize pot has gathered more than 76,632 verified signatures — enough to trigger a review by the Florida Supreme Court.

"We have a long way to go to get it on the ballot, but we will GET IT DONE TOGETHER!!!" the organization wrote in an email newsletter. "TODAY IS THE 1st VICTORY OF MANY TO COME!!!"

Next, the Florida Supreme Court will review the language of the prospective ballot item, which would regulate weed like alcohol in that marijuana would be legal "for limited use and growing" for anyone 21 years or older. Even if the language is approved, Regulate Florida would still need 766,200 signatures to put the amendment before voters.

The Florida Supreme Court review represents a significant milestone, but Regulate Florida still must hit several other targets to get recreational marijuana on the ballot. According to the group's chairman, Michael Minardi, the state has 90 days after the court's certification to complete a financial impact statement on the economic effects of legalizing recreational marijuana.  State statutes also call for the Florida secretary of state to send the proposed amendment to Florida's attorney general, who has 30 days to give an advisory opinion and potentially challenge the validity of the petition....

Last month, a poll by Quinnipiac University showed that 65 percent of Florida voters support "allowing adults to legally possess small amounts of marijuana for personal use."  However, as the Miami Herald recently pointed out, that support doesn't guarantee the amendment's success on Election Day.

There has been talk of marijuana legalization initiatives in states ranging from Arizona to Arkansas to Montana to North Dakota.  But, for various reasons, Florida would be the most significant state for a legalization vote in 2020.  For starters, it is a big state and a swing state.  In addition, because a 60% vote is needed for approval, a ballot win in the state would reveal just how potent support for full legalization can be.