Interesting data on marijuana arrests in DC after 2014 legalization initiative 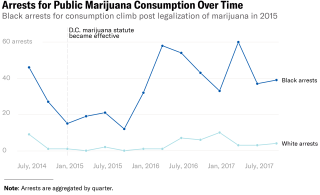 The American Civil Liberties Union of the District of Columbia has this notable new report titled "Racial Disparities In D.C. Policing: Descriptive Evidence From 2013–2017," which includes a section on marijuana arrests. Here is what this report reports (with some added emphasis):

Passed in 2014, Initiative 71 made it legal for people to possess, use, grow, and share small quantities of marijuana.  The law does not authorize individuals to consume marijuana in public or sell the drug to other people.  As a result, public consumption and distribution remains illegal.

However, while arrests for marijuana possession remained low, the number of arrests for public consumption of marijuana has been steadily increasing, particularly for Black people.  After marijuana legalization, consumption arrests briefly declined before starting to rise, increasing from 79 arrests in 2015 to 217 in 2017.  Arrests for that offense are racially skewed: even though white and Black D.C. residents use marijuana at similar rates, Black individuals comprised 80% of the individuals arrested for marijuana consumption from 2015–2017.

This disparity could stem from officers’ racial bias.  Alternatively, the disparity could be the result of another statute that makes it illegal to do in public what is legal to do in private — thereby penalizing those who have less access to private property.  These explanations could also work in tandem. No matter the cause, the consequence of the current marijuana regime is that Black people are ensnared in the criminal justice system at disproportionate rates for what the D.C. government agrees is a minor offense.

I understand the continued concern, as expressed here, that even after marijuana legalization "Black people are ensnared in the criminal justice system at disproportionate rates."  But I think the dramatic decline in the total number of marijuana arrests is the much bigger story and one that cannot be emphasized too much.  Because even the most minor of drug convictions or even just arrest can have profound impact on all sorts of future employment, schooling and housing opportunities, a yearly reduction of 1500 arrests means (somewhat invisible) yearly improvements in 1500 lives (and all those touched by those lives) thanks to marijuana reform.