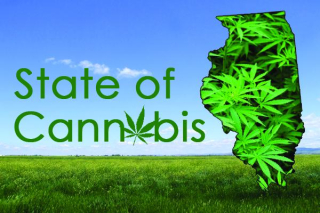 A couple of big states on the east coast, New Jersey and New York, saw efforts this year to fully legalize marijuana via traditional legislation falter.  But it seems that the biggest midwestern state, Illinois, got this done this legislative session as reported in this local article:

A recreational marijuana legalization bill will soon land on Gov. J.B. Pritzker’s desk after the Illinois House on Friday voted to pass the comprehensive measure.

The Illinois House voted 66-47 after more than three hours of debate. The Illinois Senate on Wednesday cleared the measure. The governor issued a statement applauding the bill’s passage and pledging to sign it. “The state of Illinois just made history, legalizing adult-use cannabis with the most equity-centric approach in the nation,” Pritzker said. “This will have a transformational impact on our state, creating opportunity in the communities that need it most and giving so many a second chance.”

While there are giant swaths of criminal justice and social equity reforms attached to the measure — including giving a second chance to thousands of people convicted of marijuana possession — practically speaking it will allow Illinois residents over 21 to buy cannabis from licensed dispensaries as soon as Jan. 1.

If signed into law, Illinois will become the first state to approve cannabis sales through the Legislature, instead of a ballot measure. There are laws regulating and taxing cannabis in nine states. In Vermont and Washington, D.C., cannabis possession and cultivation is legal but sales are not regulated.

The measure would also allow Illinoisans over 21 years old to possess 30 grams, or just over an ounce of cannabis flower, and 5 grams, or less than a quarter-ounce, of cannabis concentrates such as hash oil. Additionally, Illinoisans would be able to carry up to a half-gram of edible pot-infused products.

“It is time to hit the reset button on the war on drugs,” bill sponsor state Rep. Kelly Cassidy, D-Chicago, said during the debate. “What is before us is the first in the nation to approach this legislatively, deliberately, thoughtfully, with a eye toward repairing the harm and the war on drugs. We have an opportunity today to set the gold standard for a regulated market that centers on equity and repair.”...

Others weren’t convinced. State Rep. Mary Flowers, D-Chicago, said “the reset button is broken.” “The fact of the matter is nothing in this bill addresses the harm that’s been done to our community,” Flowers said. “Our community is still being used for people to make a profit and get rich and give nothing to the community.”

Amid opposition, some initiatives in the initial measure, which was filed in early May, were scaled back. A House committee this week approved changes that include allowing only medical marijuana patients to have up to five plants in a home. There were also changes made within the expungement provisions, which would have initially automatically expunged hundreds of thousands of marijuana possession convictions.

Now, convictions dealing with amounts of cannabis up to 30 grams will be dealt with through the governor’s clemency process, which does not require individuals to initiate the process. For amounts of 30 to 500 grams, the state’s attorney or an individual can petition the court to vacate the conviction.

The updated language means those with convictions for cannabis possession convictions under 30 grams can get pardoned by the governor. States attorneys would then be able to petition the court to expunge the record. A judge would direct law enforcement agencies and circuit court clerks to clear their record. This only applies to those convicted with no other violent crime associated with the charge. And it only applies for convictions that have taken place when the bill takes effect on Jan. 1....

Designed to address concerns about impaired driving, the measure would also add a DUI Task Force led by Illinois State Police to examine best practices. Those would include examining emergency technology and roadside testing.

Sales from recreational marijuana is expected to bring in $57 million in this year’s budget and $140 million next year, sponsors have said. It should eventually rise to $500 million a year once the program is fully running.