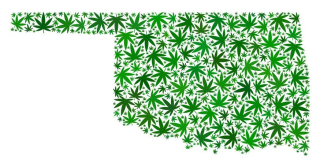 This local article spotlights the (surprising?) popularity of medical marijuana in the Sooner State under the headline "Oklahoma Medical Marijuana Authority estimated licensing 80,000 patients in year one. It's on track for 150,000."  Here are excerpts:

The Oklahoma Medical Marijuana Authority last year projected licensing 40,000 to 80,000 patients in its first year of operations. But in a surprise to OMMA personnel, the agency surpassed the 80,000-patient mark last week and could reach 150,000 by its first anniversary if the current pace of applications remains steady.

"We're probably averaging just over 5,000 a week," OMMA Director Adrienne Rollins said Thursday, which represents an increase of about 1,000 applications per week since early February, when OMMA shuttered its call center to free up time for application reviews. "We thought we would really be hammered in the very beginning and then it would start to level out. But as the number of physicians who are getting on board as far as recommending has increased, we've seen our numbers drastically increase," Rollins said. "I think at this point we're on track to have potentially 150,000."...

OMMA Communications Director Melissa Miller provided documentation to the Tulsa World showing the number of licensed patients in Oklahoma this week is more than 20 percent higher than it was the week of March 18. Miller said about 150 business license requests are submitted each week on average in recent weeks. Rollins said five OMMA employees specialize in reviewing those types of applications....

Rollins, who became the OMMA's director in October, said her department received about 3,500 patient applications between Aug. 26 and the first week of September. The number of submissions remained manageable until the winter holiday season, which is when Rollins said she noticed a "big jump" ahead of the expected widespread opening of dispensaries across the state.

By February, the OMMA closed its customer service call center, reassigning those five employees to review applications at least on a temporary basis. The move, Rollins said, means the OMMA can make decisions on up to 500 more patient applications per weekday. Of continuing to keep the call center shuttered, she said it was a "drastic change" from the OMMA's desires but maintained it was necessary to ensure applications are reviewed within the 14-day limit provided in State Question 788.

The House Rules Committee on Thursday passed a heavily amended version of Senate Bill 1030, which has a clause that if signed into law would expand the business applicant decision time to 90 days.