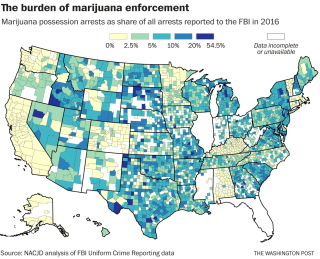 Over at the Washington Post, Christopher Ingraham has this great new piece fully titled "Where the war on weed still rages: In some U.S. counties, more than 40 percent of all arrests are for marijuana possession."  The title highlights the piece's themes, but the text and a map therein reinforce the point in various ways:

Marijuana possession led to nearly 6 percent of all arrests in the United States in 2017, FBI data shows, underscoring the level of policing dedicated to containing behavior that’s legal in 10 states and the nation’s capital.

But the figure obscures the considerable variations in enforcement practices at the state and local levels. In many areas of the country in 2016, more than 20 percent of all arrests stemmed from pot possession, according to newly released county-level arrest figures from the National Archive of Criminal Justice Data.  The figure exceeds 40 percent in a handful of counties, topping out at nearly 55 percent in one Georgia county.

The data tracks arrests, not individuals, so there’s no mechanism for winnowing out repeat offenders. Nor does it include arrests for the sale or production of marijuana.  But the numbers still illustrate how marijuana enforcement continues to make up a big part of many police agencies’ caseloads.

The findings reflect, in part, a few simple realities: The federal government incentivizes aggressive drug enforcement via funding for drug task forces and generous forfeiture rules that allow agencies to keep cash and other valuables they find in the course of a drug bust. And because marijuana is bulky and pungent relative to other drugs, it’s often easy for police to root out.

But given that recreational marijuana is legal throughout the West, and that two-thirds of the public supports legalization, critics view such aggressive enforcement tactics as wasteful, ineffective and even racially biased....

Nationwide, a few clear patterns emerge in the county-level arrest statistics from 2016, the latest year for which data is available. A swath of mostly conservative states, running from North Dakota through Texas, is home to many counties where marijuana enforcement accounts for 10 percent or more of all arrests — well above the national average.

But those conservative states are by no means alone. On the East Coast, New York and New Jersey stand out for relatively high arrest rates for marijuana possession. In New England, New Hampshire — the “Live free or die” state — also shows a high number of arrests relative to its neighbors.

States that have legalized marijuana, on the other hand, tend to have lower arrest rates. Colorado and Washington, where recreational use had been legal for two years at the time the data was taken, few counties attributed more than 2.5 percent of their arrests to marijuana enforcement.  Not a single county in California, which legalized the drug in 2016, met that threshold. Alabama and Kentucky — which are not known for liberal marijuana policies — also appeared to place a low priority on marijuana possession enforcement.

The data shows that Dooley County, Ga., has the highest rate of marijuana arrests in the nation. Out of 422 total arrests in 2016, 230, or 54.5 percent, were for marijuana possession. The next highest was Hamilton County in New York’s Adirondack Mountains, where 43.5 percent of the 130 arrests logged in 2016 targeted marijuana offenders. That’s followed by Sterling (42.1) and Hartley (42.0) counties in Texas, with South Dakota’s Edmunds County (33.3 percent) rounding out the top five.

While these counties are all small and rural, some larger counties in and around big cities also reported unusually high arrest rates. In Chesapeake, Va., (population 233,000), for instance, 23 percent of its nearly 3,600 arrests were for marijuana possession. In Maryland’s Montgomery County (population 1 million), just outside of Washington, D.C., about 20 percent of its 24,000 arrests were for pot....

Another notable component of the study is what’s missing. Individual police agencies share arrest statistics with the FBI as part of its Uniform Crime Reporting Program. But participation is voluntary, and different states use different systems to report crime and arrest data, which means that some jurisdictions have more complete coverage than others. The map above omits all jurisdictions where the reporting rate is less than 90 percent, which eliminates large parts of some states and removes others, like Illinois and Florida, completely.

Not all marijuana arrests lead to convictions or prison time. But an arrest can be highly disruptive in and of itself: Legal fees, bail and bond costs, time lost from work and the potential for pretrial detention can take a heavy toll on arrested individuals. In a number of cases, suspects have been inadvertently or deliberately killed while in police custody for possessing small quantities of pot. In one recent high-profile case, a Pennsylvania man was crushed by a bulldozer as he fled from police attempting to apprehend him over 10 marijuana plants — a quantity that is legal in other parts of the country.

This was a very interesting article. I am surprised by how many arrests there still are for cannabis crimes given the increasing rate of legalization and also the growing acceptance of cannabis throughout the United States. It seems ridiculous to have over fifty percent of a county's arrests be for marijuana crimes. I think cannabis needs to be de-criminalized to an extent. It certainly should not be the main priority for any police department. I found it interesting that Georgia seemed to strictly enforce marijuana while its fellow Southern states Alabama and Kentucky do not. The article also points out that states that have legalized (CA, WA, CO) had very low enforcement rates for marijuana. I plan on using these statistics in my final paper. As I mentioned in my presentation, lax enforcement in these states have allowed the black market for marijuana to thrive. I think states need to find a delicate balance in enforcing marijuana vs. decriminalizing marijuana to avoid "enforcement tactics [that are] wasteful, ineffective and even racially biased."