"Is the NHL the future of marijuana in pro sports?" 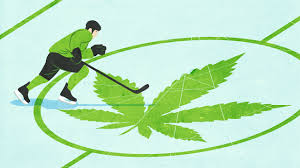 The question in the title of this post is the headline of this notable recent ESPN article that a terrific student of mine made sure I did not miss.  Here is how the lengthy piece gets started and an excerpt reviewing the NHL's notable approach to positive drug tests:

Player X is in the NHL.  After home games, he has a routine . Typically, he'll meet a few teammates at a local restaurant for a late dinner.  He likes to order steak after games -- medium rare, with a side salad and mashed potatoes.  Then he'll go home.

Player X sometimes has a hard time unwinding; it was a day of unbounded stimulation.  He woke up and arrived at the rink for a morning skate and meetings, went home to nap, returned to the arena for warm-ups (bright lights and eardrum-blasting music), then exerted his body for 20-something sub-one-minute shifts during which he shoves, sprints, reaches, shoots, gets hit and sometimes bleeds on the ice.  By the time he gets home at night, he needs something to ease the process of getting to bed.  So he'll often reach for his weed pen and take a few hits.  "Just to relax," he says.  "Honestly, it's the easiest and most natural way for me to fall asleep and be ready for the next day."

Because Player X is on a Western Conference team based in a state in which there are broad laws legalizing marijuana, he knows he's not doing anything wrong.  Actually, he's doing what he estimates thousands of others who live in his city do every night as well.

Society's views on marijuana are evolving -- fast.  On Oct. 16, Canada became the largest country in the world to legalize recreational marijuana.  Coupled with results from the midterm elections in the United States, this is the landscape: Of the 31 teams in the NHL, 28 play in states where players have access to legal marijuana, whether it is for medicinal or recreational purposes.  That's the highest percentage (90.3) of any of the major four North American pro leagues, but hardly an anomaly.

Dr. Dave Lewis and Dr. Brian Shaw are the physicians who run the NHL and NHLPA's joint Substance Abuse and Behavioral Health (SABH) Program.  If they determine Player X's test features "abnormally high levels" of THC, they flag it.  The veil of anonymity is then lifted, and the two doctors will contact Player X.  They can recommend he enters the SABH, in which they'll develop an individualized treatment plan for him. Neither the NHL nor NHLPA needs to know that he's in the program.

The league won't punish Player X at all for his test. If he chooses to enter the SABH, Dr. Lewis and Dr. Shaw have the power to levy fines, suspensions or other penalties if conditions are breached.  However, the player is not required to enter the program if he doesn't want to.

"The thing that we're really looking for is if there's a guy that has an issue or a problem and he needs help -- that's what we're trying to capture in that program," says longtime NHL defenseman Mathieu Schneider, now a senior executive at the NHLPA . "I do think it has worked very well.  We have a tremendous amount of faith in the doctors that run the program.  Confidentiality in that program is of the utmost importance."

I have long thought it notable (and not a mere coincidence) that the "whitest" major sports league, the NHL, has the most tolerant approach to marijuana and other drugs.  This ESPN article does not focus on racial issues, but rather is focused on the possibility that other major sports leagues could be attracted to the treatment-oriented marijuana policies in the NHL.  I certainly like that idea, but I am not sure why this kind of public-health approach to marijuana use ought to only benefit elite athletes.  We have used punitive models for dealing with drug use and abuse for so long, the idea that a person would not get punished by his employer for a position drug test seem surprising when it should be the norm.