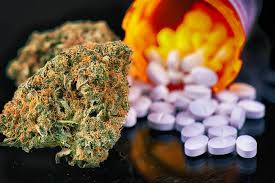 The title of this post is the title of this short new "Viewpoint" piece authored by Keith Humphreys and Richard Saitz and published in the Journal of the American Medical Association.  I recommend the full piece, and here are excerpts:

Recent state regulations (eg, in New York, Illinois) allow medical cannabis as a substitute for opioids for chronic pain and for addiction.  Yet the evidence regarding safety, efficacy, and comparative effectiveness is at best equivocal for the former recommendation and strongly suggests the latter — substituting cannabis for opioid addiction treatments is potentially harmful.  Neither recommendation meets the standards of rigor desirable for medical treatment decisions.

Recent systematic reviews identified low-strength evidence that plant-based cannabis preparations alleviate neuropathic pain and insufficient evidence for other types of pain.  Studies tend to be of low methodological quality, involve small samples and short-follow-up periods, and do not address the most common causes of pain (eg, back pain).  This description of evidence for efficacy of cannabis for chronic pain is similar to how efficacy studies of opioids for chronic pain have been described (except that the volume of evidence is greater for opioids with 96 trials identified in a recent systematic review).

The evidence that cannabis is an efficacious treatment for opioid use disorder is even weaker.  To date, no prospective evidence, either from clinical trials or observational studies, has demonstrated any benefit of treating patients who have opioid addiction with cannabis.

Substituting cannabis for opioids is not the same as initiating opioid therapy.  There are no randomized clinical trials of substituting cannabis for opioids in patients taking or misusing opioids for treatment of pain, or in patients with opioid addiction treated with methadone or buprenorphine.  In addition to surveys of patients who use medical cannabis, the other types of studies prompting a move to cannabis to replace opioids are population-level reports stating that laws allowing medical cannabis use are followed by fewer opioid overdose deaths than expected.  The methodological concern with such studies is that correlation is not causation.  Many factors other than cannabis use may affect opioid overdose deaths, such as prescribing guidelines, opioid rescheduling, Good Samaritan laws, incarceration practices, and availability of evidence-based opioid use disorder treatment and naloxone....

For opioid use disorder, there is concern that the New York State Health Commissioner has defined opioid addiction to include people being treated with US Food and Drug Administration – approved, efficacious, opioid agonist medications, as a qualifying condition for medical cannabis.  Methadone and buprenorphine treatment reduces illicit opioid use, blood-borne disease transmission, criminal activity, adverse birth outcomes, and mortality.  Discontinuing such medications increases the risk of return to illicit opioid use, overdose, and death.  The suggestion that patients should self-substitute a drug (ie, cannabis) that has not been subjected to a single clinical trial for opioid addiction is irresponsible and should be reconsidered....

Cannabis and cannabis-derived medications merit further research, and such scientific work will likely yield useful results.  This does not mean that medical cannabis recommendations should be made without the evidence base demanded for other treatments. Evidence-based therapies are available.  For chronic pain, there are numerous alternatives to opioids aside from cannabis.  Nonopioid medications appear to have similar efficacy, and behavioral, voluntary, slow-tapering interventions can improve function and well-being while reducing pain.

For the opioid addiction crisis, clearly efficacious medications such as methadone and buprenorphine are underprescribed.  Without convincing evidence of efficacy of cannabis for this indication, it would be irresponsible for medicine to exacerbate this problem by encouraging patients with opioid addiction to stop taking these medications and to rely instead on unproven cannabis treatment.