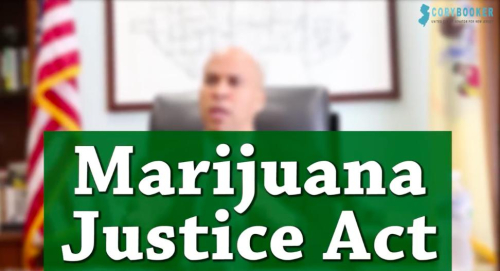 As reported in this press release, US Senator Cory Booker has joined with a number of other Democrats to formally introduce his social-justice-oriented federal marijuana reform bill.  Here are comments from the bill's sponsors (many of whom are running for President) from the press release, as well as some particulars and a link to the full bill:

"The War on Drugs has not been a war on drugs, it's been a war on people, and disproportionately people of color and low-income individuals," said Booker.  "The Marijuana Justice Act seeks to reverse decades of this unfair, unjust, and failed policy by removing marijuana from the list of controlled substances and making it legal at the federal level."

"But it's not enough to simply decriminalize marijuana.  We must also repair the damage caused by reinvesting in those communities that have been most harmed by the War on Drugs.  And we must expunge the records of those who have served their time.  The end we seek is not just legalization, it's justice."

"The War on Drugs has destroyed lives, and no one continues to be hurt more than people of color and low-income communities," said Wyden. "There is a desperate need not only to correct course by ending the failed federal prohibition of marijuana, but to right these wrongs and ensure equal justice for those who have been disproportionately impacted."

"Millions of Americans' lives have been devastated because of our broken marijuana policies, especially in communities of color and low-income communities," said Gillibrand. "Currently, just one minor possession conviction can take away a lifetime of opportunities for jobs, education, and housing, tear families apart, and make people more vulnerable to serving time in jail down the road.  It is shameful that my son would likely be treated very differently from one of his Black or Latino peers if he was caught with marijuana, and legalizing marijuana is an issue of morality and social justice.  I'm proud to work with Senator Booker on this legislation to help fix decades of injustice caused by our nation's failed drug policies."

"As I said during my 2016 campaign, hundreds of thousands of people are arrested for possession of marijuana every single year," said Sanders. "Many of those people, disproportionately people of color, have seen their lives negatively impacted because they have criminal records as a result of marijuana use. That has got to change. We must end the absurd situation of marijuana being listed as a Schedule 1 drug alongside heroin. It is time to decriminalize marijuana, expunge past marijuana convictions and end the failed war on drugs."

"Marijuana laws in this country have not been applied equally, and as a result we have criminalized marijuana use in a way that has led to the disproportionate incarceration of young men of color. It's time to change that," said Harris. "Legalizing marijuana is the smart thing to do and the right thing to do in order to advance justice and equality for every American."

"Marijuana should be legalized, and we should wipe clean the records of those unjustly jailed for minor marijuana crimes. By outlawing marijuana, the federal government puts communities of color, small businesses, public health and safety at risk." said Warren.

"This long-overdue change will help bring our marijuana laws into the 21st century. It's past time we bring fairness and relief to communities that our criminal justice system has too often left behind." said Bennet....

The Marijuana Justice Act seeks to reverse decades of failed drug policy that has disproportionately impacted low-income communities and communities of color. Beyond removing marijuana from the list of controlled substances - making it legal at the federal level - the bill would also automatically expunge the convictions of those who have served federal time for marijuana use and possession offenses, and it would reinvest in the communities most impacted by the failed War on Drugs through a community fund. This community reinvestment fund could be used for projects such as job training programs, re-entry services, and community centers.

The bill would also incentivize states through the use of federal funds to change their marijuana laws if those laws were shown to have a disproportionate effect on low-income individuals and/or people of color.

By going further than simply rescheduling marijuana with expungement and community reinvestment, Booker, Lee, and Khanna's bill is the most far-reaching marijuana legislation ever to be introduced in Congress.

The bill is retroactive and would apply to those already serving time behind bars for marijuana-related offenses, providing for a judge's review of marijuana sentences.

Full text of the bill is here.