Rounding up commentary pushing back on efforts to link marijuana, psychosis and violence 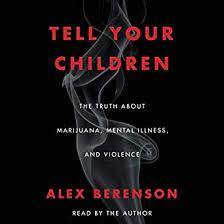 I have noted the new book by Alex Berenson, "Tell Your Children: The Truth About Marijuana, Mental Illness, and Violence,"  through his recent commentaries spotlighted here and here, as well as through Malcolm Gladwell's New Yorker essay about the book.  The core message of Berenson's book, namely that more marijuana use thanks to legal reforms is leading to more mental illness and more violence, is now generating a whole lot of push back.  Here is just a partial round-up of new commentary expressing concerns about Berenson's claims:

On Jan. 7, The Marshall Project published an interview with Alex Berenson, a former New York Times reporter and author of "Tell Your Children: The Truth About Marijuana, Mental Illness, and Violence," which warns that the rush to legalize the drug has obscured evidence of its dangers.  The interview stirred up a storm on social media, so we decided to enlarge the discussion.

What follows is a conversation, conducted by email and moderated by Bill Keller, editor-in-chief of The Marshall Project.  Berenson is joined by three other panelists. Maria McFarland Sánchez-Moreno is the executive director of the Drug Policy Alliance, a non-profit that advocates ending the war on drugs, including the "responsible regulation" of marijuana.  Its donors include companies in the legal, for-profit cannabis industry, whose gifts, the group reports, made up less than 1 percent of the alliance’s 2018 revenue. Keith Humphreys is the Esther Ting Memorial Professor at Stanford University. He has been deeply involved in drug policy as a researcher and White House advisor.  Mark A.R. Kleiman is a professor of public policy at the New York University Marron Institute of Urban Management, where he leads the crime and justice program. He is also chairman of BOTEC Analysis, which advises Washington State and Maine on cannabis regulation.

The discussion has been lightly edited for length and clarity.

The Marshall Project: This first question is for all of you. Let's start with the core question Alex set out to answer in reporting his book: What do we know about the connection between marijuana and mental illness? What would you say is established medical science, and what is still unresolved?

I have not read "Tell Your Children," but I wonder if the risks of marijuana criminalization it analyzes includes the links from prisons and jails to developmental and behavioral problems.

Incarceration itself must pose a substantial amount of risk that must be accounted for in determining the effect of marijuana's treatment as a dangerous drug compared to others of its schedule.

Mental healthcare in prisons is lacking already*. Sending more people to jail for marijuana possession might increase these risks even more.

Excellent points, Anna, and part of the huge challenge of unpacking causation and correlation and contributing factors in this space.