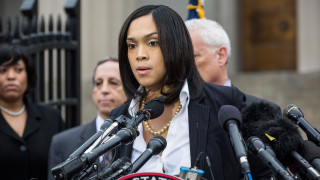 As reported in this local article, "Baltimore State’s Attorney Marilyn Mosby announced Tuesday her office would cease prosecuting people for possessing marijuana regardless of quantity or criminal history." Here is more:

Mosby follows district attorneys in Manhattan and Philadelphia who have scaled back or outright ended marijuana prosecutions. Maryland lawmakers decriminalized possession of up to 10 grams of marijuana in 2014.

But she also stood alone, politically: No police and no other city officials joined her at the announcement. Hours later, Mayor Catherine Pugh announced her support for Mosby’s plan.

Mosby aims to formalize marijuana policies already in practice. A report released Tuesday by her office shows city prosecutors dropped 88 percent of marijuana possession cases in Baltimore District Court since 2014 — 1,001 cases. [This report is available at this link.]

Still, convictions have saddled thousands in Baltimore with criminal records and frustrated their job searches, Mosby said. The marijuana arrests have disproportionately affected minority neighborhoods in Baltimore. Nationwide, African-Americans are four times more likely than whites to be arrested for possessing marijuana. The ratio jumps to six times more likely in Baltimore, prosecutors wrote in the report.

But it remains unclear how the policy will play out in the streets. Mosby made her announcement at the nonprofit Center for Urban Families in West Baltimore while surrounded by her staff, marijuana advocates and neighborhood activists. Police leaders weren’t there....

The department is run by a former agent of the Drug Enforcement Administration, Gary Tuggle; he is interim commissioner. He said his officers wouldn’t quit arresting people for possessing marijuana. “Baltimore Police will continue to make arrests for illegal marijuana possession unless and until the state legislature changes the law regarding marijuana possession,” he said in a statement....

Police leaders have long said they are focused on violent crime and marijuana arrests aren’t a priority. But officers routinely use marijuana as reason to search the pockets or car of someone suspected in more serious crimes....

Mosby has pledged to continue to prosecute anyone suspected of selling marijuana. She said her office would take cases to court when police find evidence of drug sales, such as baggies and scales....

In nearby Baltimore County, State’s Attorney Scott Shellenberger said he had no plans to quit prosecuting marijuana cases. Most first-time offenders are placed in a treatment program in the county, he said.

Mosby also urged state legislators to support a bill that would empower her office to vacate criminal convictions in everything from corrupt cop cases to marijuana prosecutions. The current procedures require action from both prosecutors and defense attorneys to vacate a conviction.

On Tuesday, prosecutors filed papers for marijuana cases dating back to 2011 to be vacated — about 1,000 in Circuit Court and nearly 3,800 in District Court. Judges would rule on the requests.