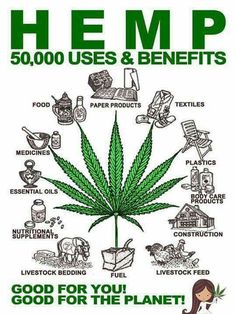 One of many reasons I typically use the work "marijuana" on this blog and in other discussions of marijuana reform is because I think it is the word most directly and commonly associated with the version of the cannabis plant (or the parts of the plant) containing the chemical ingredient (delta-9 tetrahydrocannabinol or THC) that gets humans high from consumption. But for various sound reasons, other researchers and many advocates like to talk only about "cannabis" because this is the scientific name for the plant often called marijuana and because there are so many possible uses for and derivatives from that plant that have nothing to do with getting high. Of course, regular readers surely know all this, and yet it is worth reviewing given this notable news as reported by this Marijuana Moment piece: "The Final 2018 Farm Bill ... Will Legalize Hemp." Here are the basics:

The final text of the 2018 Farm Bill was released on Monday, and industrial hemp legalization made the cut. Votes to send the legislation to President Trump’s desk are expected this week.

The bipartisan provision, championed by Senate Majority Leader Mitch McConnell (R-KY), will enable U.S. farmers to cultivate, process and sell hemp, the market for which is now a multi-billion dollar industry.

Following the announcement last month that lawmakers in the Senate and House Agriculture Committees had reconciled their respective versions of the agriculture legislation — with hemp legalization in the mix — questions remained about a controversial provision in the Senate version that would ban people with felony drug convictions from participating in the hemp industry. But a compromise was reached and the final version will allow such individuals to work for hemp businesses after 10 years....

“While this Farm Bill is a missed opportunity, there are some good provisions,” Rep. Earl Blumenauer (D-OR) said in a press release. “One of those provisions is to roll back our senseless hemp prohibition.”

“Our forefathers would be rolling in their graves if they saw us putting restraints on a versatile product that they grew themselves. We have farmers growing thousands of acres of hemp in dozens of states across the U.S. already. You can have hemp products shipped to your doorstep. This is a mainstream, billion-dollar industry that we have made difficult for farmers. It’s past time Congress gets out of their way.”

Under the legislation, hemp would no longer be in the jurisdiction of the Justice Department. Rather, the U.S. Department of Agriculture will lightly regulate the crop. If the bill passes and President Trump signs it, hemp legalization will go into effect on January 1, according to VoteHemp.

This recent lengthy CNBC artice, headlined "Hemp legalization included in new farm bill could 'open the floodgates' on nascent industry," provide a review of what enactment of this legislation could mean and how we got here. Here is a snippet:

Hemp is a cannabis cousin of marijuana but it contains low levels of THC, the chemical that produces a "high" for pot users. Industrial hemp is used to make everything from apparel, foods and pharmaceuticals to personal care products, car dashboards and building materials.

"The vast majority of the market right now is going for CBD products," said Brightfield Group's [Bethany] Gomez. "You can find some hemp seed-based beauty products or hemp in some cereals and things like that, and there's such usage on the fibers for like clothes and other industrial purposes, but that's really minimal right now."

Brightfield Group estimates the domestic hemp market could reach $22 billion in the next four years. The estimate factors in the hemp amendment in the farm bill becoming law....

"There are three words why we have hemp now, and those words are tobacco state Republicans," said Kristin Nichols, editor at Denver-based Hemp Industry Daily, a publication owned by MJBizDaily. "There's been strong support from lawmakers and politicians up and down in former tobacco states looking for a replacement crop."

The hemp provisions in the 2018 Farm Bill were in the Senate version of the legislation sponsored by Senate Majority Leader McConnell. The Kentucky Republican put himself on the joint Senate-House conference committee formed to hammer out the details of the final farm bill. "I know there are farming communities all over the country who are interested in this," McConnell said in June when discussing the hemp legalization legislation before the Senate Agriculture Committee. "Mine are particularly interested in it, and the reason for that is — as all of you know — our No. 1 cash crop used to be something that's really not good for you: tobacco. And that has declined significantly, as it should, given the public health concerns."