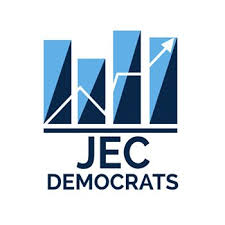 This week the Democrats of the US Congress' Joint Economic Committee released this interesting short report titled simply "The National Cannabis Economy." Here is how it gets started and its final passages:

Cannabis, or marijuana, is the most commonly used illicit drug in the United States.  Though illegal at the federal level, states are taking action to legalize cannabis — from recreational use in states like Colorado and Maine to medical use in New Mexico and Florida.  A record 66 percent of Americans now support legalizing cannabis, a dramatic increase from just 12 percent in 1969.

The legalization of cannabis has significant implications for state economies, as well as the national economy.  The industry totaled more than $8 billion in sales in 2017, with sales estimated to reach $11 billion this year and $23 billion by 2022.  There were more than 9,000 active licenses for cannabis businesses in the U.S. in 2017, with the industry employing more than 120,000 people.

As more states move to legalize cannabis, these numbers will only continue to rise, potentially providing a new stream of revenue and jobs to local economies.  But to realize these benefits, policymakers must address conflicts between state and federal regulations that impede the growth of the cannabis economy....

There are a variety of proposals to fix the conflicts between state and federal cannabis laws.  Of these proposals, the bipartisan STATES Act has drawn support from President Trump and the cannabis industry.  The STATES Act would amend the Controlled Substances Act so that its provisions no longer apply to individuals acting in accordance with state laws. Importantly, the bill would also clarify that financial transactions with state-legal cannabis businesses are not drug-trafficking, creating a solution for financial institutions and the cannabis industry.  Several states could be next to legalize cannabis.  A bill to legalize cannabis is progressing through the New Jersey legislature, while New York lawmakers are preparing to consider similar legislation this year.  Similarly, newly elected governors in New Mexico, Minnesota, Illinois, and Connecticut have all voiced support for legal cannabis, positioning their states to consider the issue.

The growth of the cannabis economy presents opportunities for greater job creation, more tax revenue, and better patient care.  But current conflicts between state and federal law threaten to impede social and economic growth.  Going forward, lawmakers and regulators should prioritize solutions that promote greater research into the health effects of cannabis and reduce regulations that restrict the industry’s ability to conduct business.