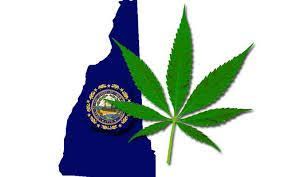 As reported in this local article, a "commission studying marijuana legalization in New Hampshire released its 264-page report with 54 recommendations that form a potential blueprint should state legislators pursue bills to legalize cannabis for adult, recreational use."  Here is a partial summary of the massive report from the press piece:

Though it takes no position on legalization, the commission produced a framework for marijuana legalization, starting with recommending lawmakers refer to it as cannabis.

Recommendations mirror some practices in the eight states that have legalized recreational pot. They include limiting possession to 1 ounce for adults (21+) and up to 5 grams of concentrate, prohibiting public indoor or outdoor consumption, allowing towns and cities an "opt-in" provision, and banning marijuana smoking lounges or in a similar restaurant or business.

Marijuana legalization could generate up to $58 million for the state. But that is the high end, notes Rep. Patrick Abrami, the commission chairman. The report cites low end range being $15.2 million to $26.9 million, and the high range being $32.7 million to $57.7 million.

It recommends creation of a “pathway” for existing therapeautic cannabis centers, which are now non-profit by law, to become for-profit organizations -- with the intent that they may enter the “adult use” market. Any proposed home cultivation should limit six plants (three mature) per person, with that limit going to 12 plans (six mature) per household.

The full report is available at this link, and here is a portion of its extended executive summary:

Despite a number of states legalizing cannabis, many important issues remain unresolved as New Hampshire contemplates legalization.  New Hampshire banks may still be reluctant to have banking relationships with marijuana businesses because of the federal position, potentially making any commercialization a cash-only industry. Many companies are working on a roadside marijuana sobriety test similar to the breathalyzer, but there is still no certified device to detect marijuana impairment. Workplace issues surrounding marijuana use and impairment are impacting businesses in states that have legalized and states that have not.  Revenue is necessary to fund public education campaigns key to safe use and to fund substance misuse prevention and treatment.  There is a need to fund and conduct research and data collection to monitor effects on health, driving while impaired, workplace safety, crime rates, usage rates, school performance, and impacts on quality of life and the NH state brand.  Vaping marijuana products has become wide-spread among our middle school, high school, and college students and needs to be addressed.  All of these facts are indisputable and viewed as such by all Commission members....

Finally, speakers from every legalized state warned that for every positive claim about marijuana, there is a negative claim that can be made.  We found this to be true and decided to carefully select high quality peer reviewed studies to present in this report rather than draw conclusions.  The studies are grouped into four categories; health, relationship to opioid misuse, youth and young adult use, and public safety. For each topic, multiple studies with abstracts are presented.  The Commission thought it important that the executive and legislative branch of NH government as well as all the citizens of NH hear both sides of the marijuana legalization argument. Therefore, the studies are further classified as those in support of legalization and those opposed to legalization.