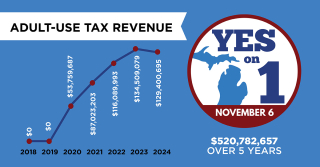 This local article, headlined "Estimated tax haul from marijuana sales would grow to $134 million per year," reports on a report on tax revenues being predicted if Michigan were this fall to become the 10th in the United States to legalize recreational marijuana. Here are some details:

By the time Michigan’s recreational marijuana market is fully fleshed out, $134.5 million in tax revenues will be flowing into the state’s coffers annually. But there’s a big caveat: Michigan voters will first have to pass a ballot proposal on Nov. 6 to legalize marijuana for adult recreational use.

The figures for state tax revenues — from the 6-percent sales tax and a 10-percent excise tax — come from VS Strategies, a Colorado-based cannabis consulting firm hired by the Coalition to Regulate Marijuana Like Alcohol, which is spearheading the campaign to legalize pot in Michigan. “We’re estimating $520 million in taxes from 2020-24,” said Andrew Livingston, a policy analyst with VS Strategies. “By 2023, Michigan will reach maturity with sales of just under $1.5 billion (for both medical and recreational marijuana).”

The revenues from recreational use will grow from $53.7 million in the first year to $134 million by the time the market matures, he said. When you add in the 6 percent sales tax and 3 percent excise tax on medical marijuana sales, the tax revenues jump another $40 million, according to the VS estimates.

The numbers are based on estimates of nearly 1 million Michiganders who have said that they’ve used marijuana in the past month and who could be expected to buy marijuana on a regular basis. Another 3.5 million people in Michigan have said they have used marijuana in their lifetime. The total number of marijuana users includes 300,000 people who are registered as medical marijuana users, Livingston said. Michigan’s tax rate is far lower than many of the other nine states that have legalized pot for recreational use... Michigan’s proposed rate is lower than other states in order to be more competitive and to attract more people to the state’s budding marijuana market, coalition spokesman Josh Hovey said.

The first $20 million in tax revenues for each of the first two years would go to research into the effects of marijuana use on different health ailments, including PTSD in veterans. Of the remainder, 35 percent would go toward roads, 35 percent to schools and 30 percent to the counties and communities that allowed marijuana businesses in their towns.

But the projected tax revenues, even when the market is fully established, fall well below the taxes generated in Colorado, the first state to legalize marijuana for recreational use, which collected $247.3 million in taxes in 2017.

Michiganders shouldn’t just look at the tax revenues coming in from marijuana legalization, said Scott Greenlee, director of Healthy and Productive Michigan, a group opposing the ballot proposal. “What impact would it have in Michigan with a $57-billion budget? It’s just not that significant,” he said. “And then we have to deal with the unintended consequences of fighting increased addiction. I wonder if there would be anything left for Michigan other than a bad policy that will affect the state for decades to come.”

He said the 35 percent of tax revenues that would go toward improving Michigan’s roads would be a drop in the bucket for the state’s 120,000 miles of roads. “According to MDOT, the cost to improve roads is about $1 million per lane,” Greenlee said. “In their best case scenario, 35 miles of one lane of roads would be improved thanks to this new tax.”

Hovey said the coalition never promised that the marijuana tax revenues would be a cure-all for Michigan’s budget woes. “This will help fund the state’s most important needs. And we’ll be saving millions in wasted costs of continuing to enforce the prohibition of marijuana laws,” he said. “And I think the majority of the state’s residents would agree that our roads need more revenue.”