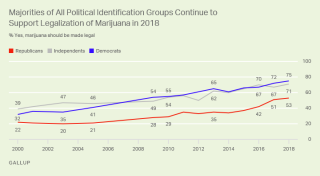 As reported in this new posting from Gallup, "Sixty-six percent of Americans now support legalizing marijuana, another new high in Gallup's trend over nearly half a century.  The latest figure marks the third consecutive year that support on the measure has increased and established a new record."  Here is more:

Legalizing the use of pot was an unpopular idea when Gallup first asked Americans about it in 1969 -- just 12% at that time said it should be made legal.  Support grew in the 1970s but stagnated in the 20% range until the new millennium, when momentum for legalization picked up again.  Since 2000, support for legalizing marijuana has trended steeply upward, reaching majority support for the first time in 2013 -- a year after Colorado and Washington voters legalized recreational use of marijuana via ballot initiatives, making them the first states to do so.  Marijuana use continues to be illegal at the federal level.

Gallup found last year that a slim majority of Republicans supported legal marijuana for the first time, and this year's figure, 53%, suggests continued Republican support.  Views that pot should be legalized have also reached new peaks this year among Democrats (75%) and independents (71%). Democrats reached majority-level support for legalization in 2009, and independents did so in 2010.

Among Americans aged 55 and older, views that marijuana should be legalized now surpass the majority level, with 59% support, up from 50% last year. Meanwhile, solid majorities of younger adults have supported legalization for several years.  Support is strongest among adults aged 18 to 34, at 78%, while nearly two in three adults aged 35 to 54 (65%) approve of legalizing marijuana.

In 2009 and 2010 -- before any state had legalized pot -- support for legalization reached the majority level in only one U.S. region -- the West, at 56%.  And in most polls since, residents in the West, along with Eastern residents, have led the remaining regions in favoring legalized pot.

Like support for gay marriage -- and in prior years, interracial marriage -- support for marijuana legalization has generally only expanded, even if slowly, over the course of multiple decades -- raising the question of where the ceiling in support might be.  As the percentage of Americans who favor legalizing pot has continued to grow, so has the number of states that have taken up legislation to allow residents to use the substance recreationally. States that permit use of medical marijuana are even more prevalent in the U.S. than states allowing recreational pot are.

After this year's elections, recreational pot use could be allowed in two more states, depending on what voters decide in North Dakota and Michigan.  Both of these states border Canada, whose adult residents now have access to legal marijuana nationwide.  Meanwhile, state lawmakers in New Jersey are moving closer to passing legislation to legalize pot, and neighboring New York might not be far behind after the state's health department conducted a study that led to its recommendation that marijuana be legal.

But even as many states take action to legalize pot, to date, no Midwestern or Southern states permit legal recreational use -- though medicinal marijuana is allowed in a few of these states.  Now that public support is consistent across U.S. regions, legalization could spread to new areas in the future.