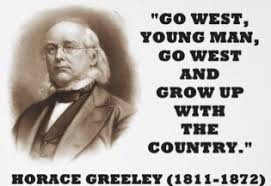 The title of this post is my weak attempt to make a play on the phrase "Go West, young man" to capture Manifest Destiny concepts combined now with this new AP article about marijuana reform efforts this election year.  The AP piece is headlined "Marijuana backers look for Midwest breakthrough in November," and here are excerpts:

Backers of broad marijuana legalization are looking to break through a geographic barrier in November and get their first foothold in the Midwest after a string of election victories in Northeastern and Western states.

Michigan and North Dakota, where voters previously authorized medical marijuana, will decide if the drug should be legal for any adult 21 and older. They would become the 10th and 11th states to legalize so-called recreational marijuana since 2012, lightning speed in political terms.

Meantime, Missouri and Utah will weigh medical marijuana, which is permitted in 31 states after voters in conservative Oklahoma approved such use in June. Even if Utah’s initiative is defeated, a compromise reached last week between advocates and opponents including the Mormon church would have the Legislature legalize medical marijuana.

“We’ve kind of reached a critical mass of acceptance,” said Rebecca Haffajee, a University of Michigan assistant professor of health management and policy. She said the country may be at a “breaking point” where change is inevitable at the federal level because so many states are in conflict with U.S. policy that treats marijuana as a controlled substance like heroin. “Generally, people either find a therapeutic benefit or enjoy the substance and want to do so without the fear of being a criminal for using it,” Haffajee said....

In Michigan, surveys show the public’s receptiveness to marijuana legalization tracks similarly with nationwide polling that finds about 60 percent support, according to Gallup and the Pew Research Center.

The Washington-based Marijuana Policy Project was the driving force behind successful legalization initiatives in other states and has given at least $444,000 for the Michigan ballot drive. “The electorate is recognizing that prohibition doesn’t work. There’s also a growing societal acceptance of marijuana use on a personal level,” said Matthew Schweich, the project’s deputy director. “Our culture has already legalized marijuana. Now it’s a question of, ‘How quickly will the laws catch up?’” added Schweich, also the campaign director for the Michigan legalization effort, known as the Coalition to Regulate Marijuana Like Alcohol.

Midwest voters have considered recreational legalization just once before, in 2015, when Ohio overwhelmingly rejected it. Supporters said the result was more back lash against allowing only certain private investors to control growing facilities than opposition to marijuana.

Proponents of Michigan’s measure say it would align with a new, strong regulatory system for medical marijuana businesses and add roughly $130 million annually in tax revenue, specifically for road repairs, schools and municipalities. Military veterans and retired police officers are among those backing legalization in online ads that were launched Tuesday.

Critics say the Michigan proposal is out of step and cite provisions allowing a possession limit of 2.5 ounces (71 grams) that is higher than many other states and a 16 percent tax rate that is lower. Opponents include chambers of commerce and law enforcement groups along with doctors, the Catholic Church and organizations fighting substance abuse....

In North Dakota, legalization faces an uphill battle. No significant outside supporters have financed the effort, which comes as the state still is setting up a medical marijuana system voters approved by a wide margin two years ago.

The medical marijuana campaign in predominantly Mormon Utah, which has received $293,000 from the Marijuana Policy Project, was jolted last week when Gov. Gary Herbert said he will call lawmakers into a special postelection session to pass a compromise deal into law regardless of how the public vote goes.

Medical marijuana also is on the ballot in Missouri and while the concept has significant support, voters may be confused by its ballot presentation. Supporters gathered enough signatures to place three initiatives before voters. Two would change the state constitution; the third would amend state law. If all three pass, constitutional amendments take precedence over state law, and whichever amendment receives the most votes would overrule the other.

An organizer of one amendment, physician and attorney Brad Bradshaw, said it is unclear if having three initiatives could split supporters so much that some or all of the proposals fail. “A lot of people don’t really even have this on the radar at this point,” he said. “They’re going to walk into the booth to vote and they’re going to see all three of these and say, ‘What the heck?’ You just don’t know how it’s going to play out.”