Could the feds really be gearing up for a criminal crackdown on Colorado's state-compliant marijuana businesses? 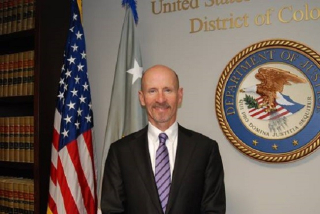 The question in the title of this post is the one I have been thinking about since, Bob Troyer, the US attorney for the District of Colorado, authored this Denver Post commentary under the headline "It’s high time we took a breath from marijuana commercialization." Here are some key excerpts from the piece, with a few lines emphasized:

In 2012 we were told Colorado would lead the nation on a grand experiment in commercialized marijuana. Six years later — with two major industry reports just released and the state legislature and Denver City Council about to consider more expansion measures — it’s a perfect time to pause and assess some results of that experiment.

Where has our breathless sprint into full-scale marijuana commercialization led Colorado?  Well, recent reports from the Rocky Mountain High Intensity Drug Trafficking Area, from Denver Health, from Energy Associates, from the Colorado Department of Revenue and from the City of Denver should be enough to give everyone in this race pause.

Now Colorado’s youth use marijuana at a rate 85 percent higher than the national average.  Now marijuana-related traffic fatalities are up by 151 percent.  Now 70 percent of 400 licensed pot shops surveyed recommend that pregnant women use marijuana to treat morning sickness.  Now an indoor marijuana grow consumes 17 times more power per square foot than an average residence.  Now each of the approximately one million adult marijuana plants grown by licensed growers in Colorado consumes over 2.2 liters of water — per day.  Now Colorado has issued over 40 little-publicized recalls of retail marijuana laced with pesticides and mold.

And now Colorado has a booming black market exploiting our permissive regulatory system — including Mexican cartel growers for that black market who use nerve-agent pesticides that are contaminating Colorado’s soil, waters, and wildlife....

As the U.S. attorney leading other U.S. attorneys on marijuana issues, I have traveled the country and heard what people are saying about Colorado. Do they tout Colorado’s tax revenue from commercialized marijuana? No, because there’s been no net gain: marijuana tax revenue adds less than one percent to Colorado’s coffers, which is more than washed out by the public health, public safety, and regulatory costs of commercialization.

Do they highlight commercialization’s elimination of a marijuana black market? No, because Colorado’s black market has actually exploded after commercialization: we have become a source-state, a theater of operation for sophisticated international drug trafficking and money laundering organizations from Cuba, China, Mexico, and elsewhere.

Do they promote our success in controlling production or containing marijuana within our borders? No, because last year alone the regulated industry produced 6.4 metric tons of unaccounted-for marijuana, and over 80,000 black market plants were found on Colorado’s federal lands.

Does the industry trumpet its promised decrease in alcohol use? No, because Colorado’s alcohol consumption has steadily climbed since marijuana commercialization. How about the industry’s claim that marijuana will cure opioid addiction? No, a Lancet study found that heavy marijuana users end up with more pain and are more likely to abuse opioids....

I’m not sure the 55 percent of Coloradans who voted for commercialization in 2012 thought they were voting for all this.

These impacts are why you may start seeing U.S. attorneys shift toward criminally charging licensed marijuana businesses and their investors.  After all, a U.S. attorney is responsible for public safety.

My office has always looked at marijuana solely through that lens, and that approach has not changed. But the public safety impacts of marijuana in Colorado have.  Now that federal enforcement has shot down marijuana grows on federal lands, the crosshairs may appropriately shift to the public harms caused by licensed businesses and their investors, particularly those who are not complying with state law or trying to use purported state compliance as a shield.

We should pause and catch our breath before racing off again at the industry’s urging. Let’s call it “just say know.” Let’s educate ourselves about the impacts of commercialization. Let’s reclaim our right as citizens to have a say in Colorado’s health, safety, and environment. Unfettered commercialization is not inevitable. You have a say.

I read this commentary as a warning of sorts, particularly to undercut the notion that some businesses may have that simply possessing a license from the state insulates them from federal prosecution.  In many ways, even when the Cole Memo was in place, that was not true.  But I sense from this piece that there is a growing concern about the way some in the licensed industry are operating, and this idea is made even clearer in this Westword piece with a Q&A with Mr. Troyer and this AP piece with additional quotes.

Were I involved in a Colorado marijuana business now, I would give particular attention to this statement from the AP piece: "'You can do plenty of harm to the community and still be in compliance with state law because those laws have a lot of loopholes and they're very permissive,' Troyer said." Specifically, if I was running a Colorado marijuana business, I would be spending a lot more time trying to document how my business was helping, rather than harming, the community (as well as, of course, documenting compliance with state laws).