"Alabama’s War on Marijuana: Assessing the Fiscal and Human Toll of Criminalization" 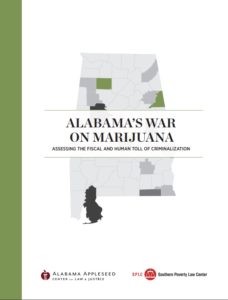 The title of this post is the title of this impressive new report released this past week by the Alabama Appleseed Center for Law and Justice and the Southern Poverty Law Center.  This posting provides an overview of the 50+-page report, and here are portions of the executive summary:

In Alabama, a person caught with only a few grams of marijuana can face incarceration and thousands of dollars in fines and court costs.  They can lose their driver’s license and have difficulty finding a job or getting financial aid for college.

This war on marijuana is one whose often life-altering consequences fall most heavily on black people – a population still living in the shadow of Jim Crow. Alabama’s laws are not only overly harsh, they also place enormous discretion in the hands of law enforcement, creating an uneven system of justice and leaving plenty of room for abuse.

This year in Etowah County, for example, law enforcement officials charged a man with drug trafficking after adding the total weight of marijuana-infused butter to the few grams of marijuana he possessed, so they could reach the 2.2-pound threshold for a trafficking charge.

This report is the first to analyze data on marijuana-related arrests in Alabama, broken down by race, age, gender and location. It includes a thorough fiscal analysis of the state’s enforcement costs. It also exposes how the administrative burden of enforcing marijuana laws leaves vital state agencies without the resources necessary to quickly test evidence related to violent crimes with serious public safety implications, such as sexual assault.  The study finds that in Alabama:

• In at least seven law enforcement jurisdictions, black people were 10 or more times as likely as white people to be arrested for marijuana possession.

• In 2016, police made more arrests for marijuana possession (2,351) than for robbery, for which they made 1,314 arrests – despite the fact that there were 4,557 reported robberies that year.

• The enforcement of marijuana possession laws creates a crippling backlog at the state agency tasked with analyzing forensic evidence in all criminal cases, including violent crimes. As of March 31, 2018, the Alabama Department of Forensic Sciences had about 10,000 pending marijuana cases, creating a nine-month waiting period for analyses of drug samples. At the same time, the department had a backlog of 1,121 biology/DNA cases, including about 550 “crimes against persons” cases such as homicide, sexual assault and robbery....

And, as the human toll discussed throughout this report falls disproportionately on black people, legalization offers an opportunity to begin to address the disproportionate harms that Alabama’s criminal justice system causes to its African-American population.  It’s time for Alabama to join an increasing number of states in taking a commonsense, fiscally responsible approach to marijuana policy.