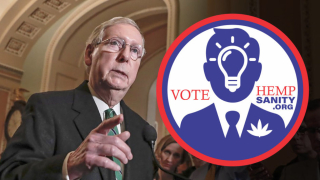 The title of this post is the headline of this effective Rolling Stone article which does a nice job explaining the intricacies of the connections between hemp and CBD product and marijuana and why Senate Majority Leader Mitch McConnell may be greasing the path toward a CBD-friendly world.  I recommend the piece in full, and here are some key excerpts:

CBD’s legality is complicated, to say the least. Without getting into the mind-numbing specifics, let’s just say that reasonable people disagree about whether it is possible for any CBD to be legal, and shops selling CBD products in states like Indiana and Tennessee have been raided by local law enforcement. So in order for mainstream retailers to feel comfortable carrying CBD products and Kentucky’s farmers to subsequently cash in on the CBD craze, McConnell put together legislation making it official. Though he’s focused his hemp legalization rhetoric on helping farmers and bland-sounding industrial products, his true intentions became abundantly clear about two weeks ago, when Sen. Chuck Grassley (R-IA) proposed an amendment that would exclude CBD and other major compounds (called cannabinoids) from the definition of legal hemp.

McConnell shot the proposal down, saying, “I’ve declined to include suggestions that would undercut the essential premise of the bill, namely that hemp and its derivatives should be a legal agricultural commodity.” At no point did he refer directly to the “derivative” that was up for discussion. But anyone paying close attention understood what he was talking about.

“McConnell’s omission of CBD is not a denial of it. It’s simply a tactical political move,” says Carl Cameron, a former Fox News commentator who now works for New Frontier Data, a D.C.-based firm that provides information on the cannabis industry to investors. “He’s trying to help potential supporters avoid criticism in places where opposition to marijuana might be misconstrued and then undermine support for hemp.”

Leslie Bocksor, who runs the cannabis consulting firm Electrum Partners, agrees that McConnell has downplayed the fact that CBD is a primary motivation for legalizing hemp so as to fly below the radar of anti-pot donors and voters. “This is just a way for McConnell to be able to move this forward without taking the political risk in talking about what’s going on, which is, yes, CBD is in so much demand that the supply can’t possibly equal the demand any time in the foreseeable future,” Bocksor says. “This is part of the Kabuki theater of the political environment we’re in today.”

Bocksor himself has embraced this kind of winking reference – hemp as a euphemism for CBD – as a business strategy. For the past few years, he’s been advising the companies he works with to avoid mentioning CBD directly or making any medical claims about what the product can do in order to avoid interference from law enforcement or warning letters from the federal government. Label everything as “hemp extract,” Bocksor says, and the consumer will know you mean CBD, as well as what kinds of health benefits can be expected.

Culturally, hemp has long been seen as a taller and more fibrous cannabis plant than marijuana, but the legal distinction is based only on THC content. Once CBD started to enter the mainstream consciousness about five years ago, pot farmers in states like Colorado and California began to breed strains of cannabis that were high in CBD but contained so little THC that they could be reclassified as “hemp.” Around the same time, the 2014 Farm Bill created a pilot program where state departments of agriculture and universities could register farmers to grow “hemp” — meaning, cannabis that was less than 0.3 percent THC. McConnell’s home state of Kentucky is the second biggest producer of hemp under this program – behind only Colorado. And while most people believe that the hemp pilot program in the 2014 Farm Bill was not created with the intention of causing a boom in CBD products, that is exactly what happened....

For now, the legal status of CBD is still murky. But with McConnell’s support, there is a good chance that the House’s version of the Farm Bill will include a provision to legalize hemp-derived CBD, and potentially open the door a world where you can find CBD soaps and CBD tinctures on the shelves at Target and CVS.